Say what? Charles Oakley hints Jeff Bezos wants to buy the Knicks, but is it true?

Could it be that the Knicks may be up for sale? What's more could it go to gazillionaire Jeff Bezos? Former Knick Charles Oakley seemed to at least pass on a rumor that it could be true 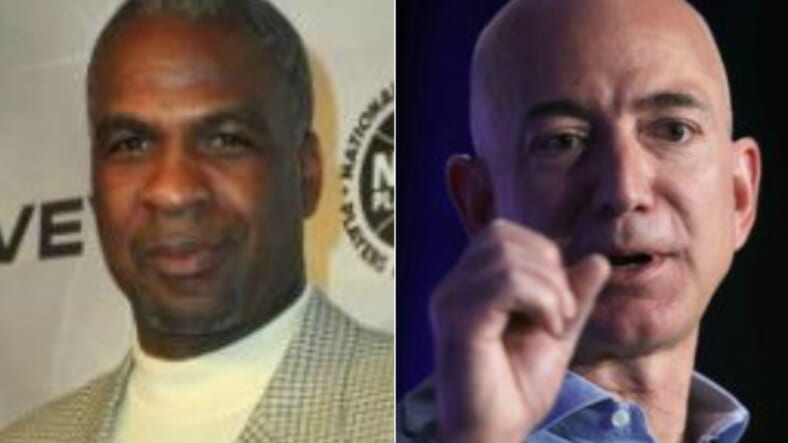 Ubiquitous technology entrepreneur Jeff Bezos, who founded Amazon and now owns The Washington Post, may be interested in buying the New York Knicks, according to some tea  Charles Oakley just dished on a pilot cooking show.

During a pilot of The Ringer’s “Tough Chef with Charles Oakley,” the aspiring chef and former Knicks forward said he heard the rumors and even added some specifics.

“He was going to try Amazon in Long Island, and he went to Virginia. He still (wants) to do some real estate in New York. Why not buy the Garden?” Oakley dished to The Ringer’s Bill Simmons and Jason Concepcion, according to The New York Post. “That’s someone you can’t question,” Oakley added, reported The Post. “It ain’t like he needs to get three or four other investors. He’s the investor, himself.”

Amazon was all but set to build a new headquarters in Queens, N.Y., when the multi-billion dollar deal collapsed and the online superstore reneged on its plans for the new facility.

For some time, rumors have circulated that Knicks owner, James Dolan, plans to sell the team.

In February, Simmons said on The Ringer that Dolan is entertaining offers. However, the Garden denies the rumors.

For his part, Oakley is not exactly Dolan’s biggest fan and so it is unclear if he has inside information or is just repeating rumors in the hopes that Dolan leaves.

In September, Oakley sued Dolan and Madison Square Garden over a 2017 incident in which he and two security guards got into a fight and was escorted from the game. Later, misdemeanor assault charges filed against him were dismissed.

Then again on March 13, Oakley filed court papers against Dolan where he is asking a federal judge to watch a video showing Dolan removing a heckler, who yelled for him to sell the team, from the game, according to The New York Post. The fan is now banned from attending games at Madison Square Garden, which Dolan refers to as an ambush.

READ MORE: Charles Oakley dragged out of Knicks game as things get physical

Oakley counters that the video in this latest incident is “germane” to answer a motion by Dolan to have Oakley’s lawsuit thrown out. Oakley hopes to show a pattern.

To make matters worse, on The Ringer, Oakley dampened the hopes of Knicks fans that Golden State’s Kevin Durant and/or Boston’s Kyrie Irving would choose to play in New York.

“It’s too much problems with management, the fans,” Oakley said, according to The Post. “There’s too much going on with the team. Tanking. I think they’re going to get Kemba (Walker) and (Jimmy) Butler, before KD or Kyrie.”