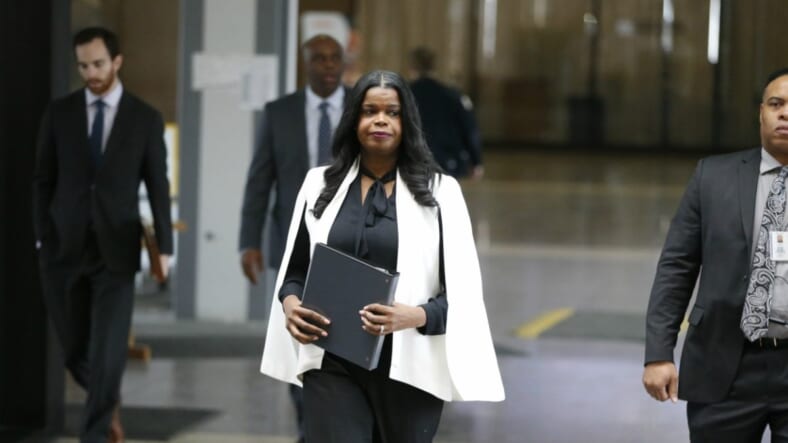 On Monday, U.S. Rep. Bobby Rush, activist Ja’Mal Green, and other supporters defended Cook County Prosecutor Kim Foxx against the city’s Fraternal Order of Police who they believe is on a witch hunt to take her down, The Chicago Tribune reports.

“The FOP has always taken the position that black people can be shot down in the street by members of the Chicago Police Department, and suffer no consequences,” Rush said. “Let’s be clear: Kim Foxx, her battle, is with the FOP and all of their cohorts.”

—Chicago’s new mayor-elect says of Jussie Smollett: ‘He’s got to be held accountable’—

Foxx has been heavily scrutinized for her office’s handling of the Smollett case alleged fake hate crime case, which resulted in all 16 felony criminal charges dropped. That decision angered the city’s Fraternal Order of Police, the Police Superintendent, and the Mayor.

Protests were held against and in support of Foxx and the FOP has called for her immediate resignation.

On Saturday during a speech at Rev. Jesse Jackson Sr.’s Rainbow PUSH Coalition, Foxx suggested that the wrath has much to do with her race.

“I have been asking myself for the last two weeks, ‘What is this really about?’ ” she said.

There were rumors that during the protests, where hundreds of people attended, white nationalists were in the mix protesting along with the police union.

“The injection of white nationalists in this conversation for me, I will tell you personally, I was afraid,” Foxx said Saturday.

“I would certainly hope that the FOP and whatever their disagreements with me may be, whatever concerns that they may have about my ability or leadership, would at least expect the people of their union to not inject racism or white nationalists into the conversation.”

The union pushed back against Rush’s comments on Saturday, calling them “ignorant, offensive, malicious, and false.”

“These outrageous and irresponsible comments have demeaned each and every Chicago Police Officer, regardless of their race,” the union said.

Since the blowback from the Smollett case, a former assistant state’s attorney in Foxx’s office filed a petition seeking a special prosecutor to revisit the Smollett case and to examine if Foxx interfered in any way.

Foxx stands by her decision and believes there is a bigger conspiracy at play.

“The efforts that I’ve had on criminal justice reform that were once celebrated by many in this county, that are now being attacked because of one case and one celebrity — I think we have to ask ourselves: What is this really about?” Foxx said.

“I have never, will never, speak ill of our partners in this work,” she said. “Even though there are challenges between any relationship, you have never seen the Cook County state’s attorney stand in any podium, stand in any room and disrespect or disregard any of those partners.”