A series of police recordings with racist comments that were brought up, but resulted in the demotion by the mayor of the Black police chief could mar the candidate's new campaign 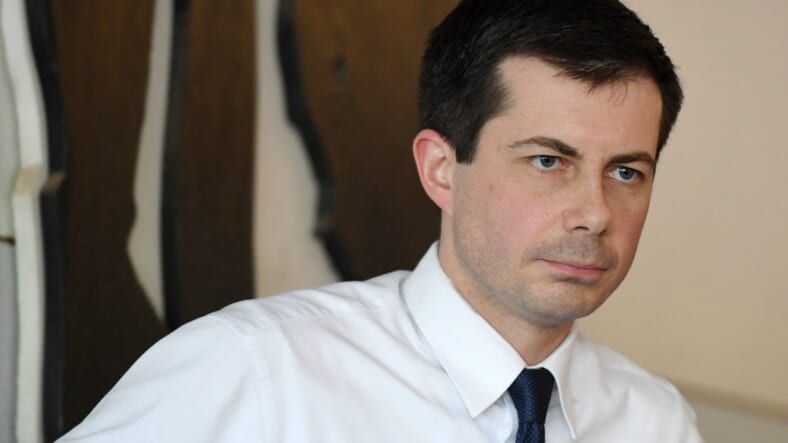 South Bend, Indiana Mayor Pete Buttigieg listens to a question during a meet-and-greet at Madhouse Coffee on April 8, 2019 in Las Vegas,

A secret recording of South Bend, Ind., police making racist comments could become a focal point in a bid by Mayor Pete Buttigieg to win the Democratic nomination for next year’s White House race.

The South Bend Common Council is pushing to have the tapes made public and an Indiana judge could rule soon on whether to release the five cassette tapes, The Hill is reporting.

Buttigeig, 37, has seen a surge in attention via social media since buzz began that he might enter the race. He officially kicked off his campaign on Sunday and if elected, he would become the first openly gay U.S. president.

The taping issue surrounds a system that automatically recorded a detective’s telephone conversations. As that detective left, the device continued to record other officers who made racist comments, NBC News reported.

The police department’s former communications director discovered the remarks, as well as further conversations that referenced a criminal conspiracy, and she brought the recording to the attention of former Police Chief Darryl Boykins, who is Black.

But the chief and the communications director were punished after the mayor’s office said the recordings violated laws that require one party to consent when recordings are made, according to NBC.

After Boykins, now a captain, was demoted, he sued the city in 2012; alleging that the wiretapping scandal was used as an excuse to get rid of him.

South Bend’s Black community roundly criticized the Buttigieg administration for the demotion and Black pastors have said they want the tapes made public, NBC News reported.

The tapes, in fact, are at the center of a legal tug of war. As the Common Council pushes for them to be made public, a group of police officers is suing South Bend in an attempt to block the release, saying the audio was illegally recorded.

In pushing for the release of the tapes, the Common Council said there was “implied consent” among the police officers because it was common knowledge that the police department records telephone calls, NBC News reported.