Is the Trump campaign even attacking art dedicated to Barack Obama? A t-shirt on his campaign website is apparently doing just that 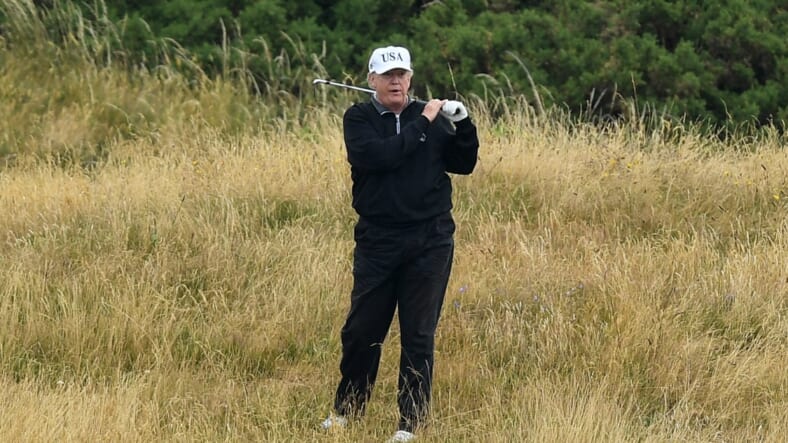 In an effort to raise funds for President Trump’s 2020 re-election effort, an online store on his campaign website is selling merchandise that apparently lampoons Kehinde Wiley’s official portrait of former president Barack Obama, by turning the image into one that depicts Obama spying on Trump, arts and culture web magazine Hyperallergic.com reports.

The t-shirt and tank top depicts Obama “spying” on Trump through the bushes that surround his official portrait. In one of the pics, Obama is drawn wearing a pair of binoculars.

We can't let Democrats and their cronies in the Fake News cover up corruption in the SWAMP!

We must FIGHT BACK and GET ANSWERS. Get your LIMITED EDITION "I Spy Trump" Tee and Tank NOW! Links below.

Both portraits continue to bring record traffic to the museum.

But Trump’s satirized shirt of Obama’s portrait is selling on the site for $28.00. It is unclear how many shirts have been purchased from the site.

The shirts include instructions for Trump supporters to text “SPY” to 88022, which is a phone number that is connected to a marketing division within Trump’s reelection campaign, according to Hyperallergic.

READ MORE: Love or hate the new Obama presidential portraits, this is a massive win for Black culture

The shirts, which also join other Trump-apparel, including Make America Great Again hats, “Collusion Delusion” shirts and “Witch Hunt” decals, are part of the store run by the Trump Make America Great Again Committee. The committee is seeing some success attracting small donors to its campaign, according to a recent report by OpenSecrets, which reported that Trump’s campaign raised $30.3 million in the first quarter of 2019, which nearly tripled the leading Democrat Bernie Sanders’ $12 million haul.

The skewing of Wiley’s painting may have come from a meme that circulated in conservative circles across social media last year. On WorldNetDaily, the rightwing website, the same images can be seen of Obama.