If made into the law the policy would split apart families. 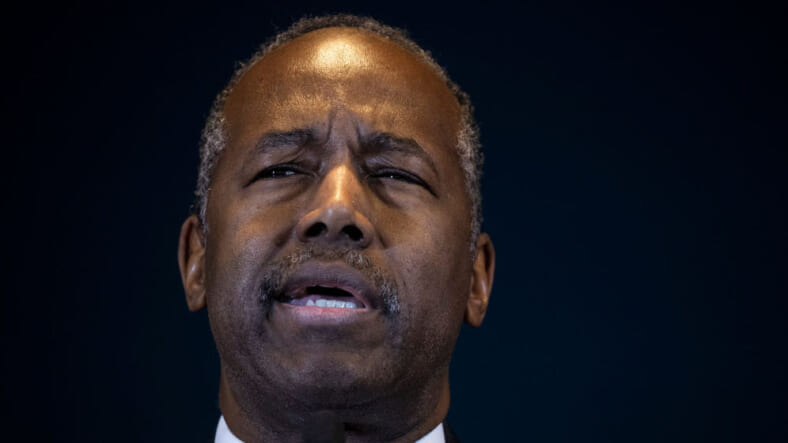 NEW YORK, NY – JANUARY 31: Ben Carson, Secretary of Housing and Urban Development (HUD), speaks after signing a ceremonial agreement between the federal government and the City of New York intended to correct mismanagement of the New York City Housing Authority (NYCHA), during a press conference at the Jacob Javits Federal Building, January 31, 2019 in New York City. The agreement paves the way for the appointment of a federal monitor to eventually replace the current interim chairman of NYCHA. (Photo by Drew Angerer/Getty Images)

Housing and Urban Development Secretary Ben Carson applauded Trump’s policy proposal to kick undocumented family members of US citizens out of public housing if they reside with them, reports BuzzFeed News.

“Thanks to @realDonaldTrump‘s leadership, we are putting America’s most vulnerable first. Our nation faces affordable housing challenges and hundreds of thousands of citizens are waiting for many years on waitlists to get housing assistance,” Carson tweeted on Thursday.

Last week, Congress started reviewing the proposal which will undergo a 15-day review period before being made available for public comments.

The Trump administration is working to slowly but surely strip DACA recipients from protections. In December, according to Buzzfeed, HUD was denying federal housing loans to DACA recipients, something which Carson said he didn’t know why it was happening.

“We’re very concerned about this, this is obviously part of the administration’s overall attack on immigrant families,” said Karlo Ng, supervising attorney at the National Housing Law Project. “There’s a lot of concern for families who are currently being assisted. This is going to add to the chaos for families who need crucial assistance.”

As it stands, undocumented people don’t benefit from receiving public housing help. The  families they live with only receive partial subsidies for citizens or whoever is documented. Undocumented people however can reside with them in the same home, something Trump now wants to change by having them evicted.

“If forced to, the majority of [mixed-status families] would likely split up their families rather than lose the assisted unit. So while the proposal may scare or force families into breaking up their household, it’s very unlikely to free up units for others on the waiting list,” said Yentel.

“I can’t imagine what the process will look like for housing agencies that are now trying to remove people from units, or effectively rip families apart” if the policy goes into effect, said Adrianne Todman, CEO of the National Association of Housing and Redevelopment Officials.