Pete Buttigieg meets Rev. Al Sharpton for Sylvia’s lunch tradition — but what did they discuss?

The Democratic candidate, known popularly as "Mayor Pete" says the two discussed "racial disparities" in the economy during the lunch. 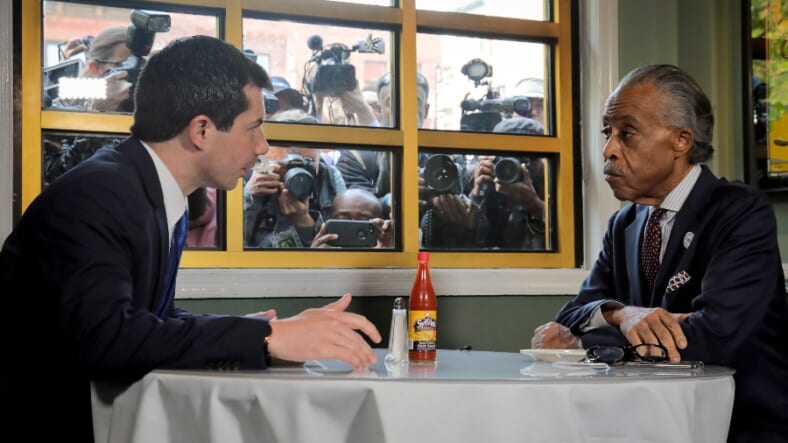 At least that’s what was suggested after Buttigieg rode the subway and asked to bless the food before eating during lunch with Rev. Sharpton in Harlem.

The Sylvia’s soul food lunch tradition is one that Rev. Sharpton has done with everyone from then-candidate President Barack Obama to Sen. Kamala Harris back in February.

As it usually goes, eager reporters lurk outside the windows and around the famous establishment, hoping to get a candidate on the record on the issues after the lunch.  Meanwhile, candidates are put on the spot as they figure out whether to eat fried chicken with a fork or their fingers (pro tip: don’t use a fork).

“It’s not rude to eat with my hands is it?” – @PeteButtigieg says as he grinds through a piece of fried chicken.

“No, no, go ahead, eat chicken with your hands,” Al Sharpton replies. pic.twitter.com/tDP3mpXNbA

While Buttigieg (pronounced Butt-edge-edge) has no tab on his website specifically dedicated to policy agendas or plans which explicitly impact the Black community, the lunch conversation was supposed to have centered on that agenda.

It was also meant to cover “the need to confront homophobia in the faith community as well as the Mayor’s policy agenda for the Black community in Indiana and around the country,” according to a statement from Rev. Sharpton’s team. Buttigieg is the only openly gay candidate in the 2020 presidential race.

“We talked about an agenda for Black America that’s gonna be a very important part of my campaign,” Buttigieg told reporters after the lunch.

“Something that focuses on homeownership, entrepreneurship, health, education and criminal justice reform in the context of making sure our democracy is accessible to everybody,” he continued.

“And in particular that the racial disparities we see to a prosperous life in our economy, that those inequities have to be torn down.”

We were in the audience as he declared “Black Lives Matter” last month at Sharpton’s National Action Network convention. (He also declared ‘all lives matter’ in 2015 but says he doesn’t use the phrase anymore).

Despite the light policy talk, Mayor Pete, has garnered headlines for being the youngest Democrat in the race for president at 37-years-old and a fundraising draw.

His political experience isn’t extensive as other candidates — he has only been mayor of one city, South Bend, Ind., but he’s also a Harvard and Oxford graduate, Rhodes scholarship winner and military veteran who served a tour in Afghanistan.

Buttigieg previously said “any white candidate needs to show a level of consciousness around issues like white privilege.”