While some believe justice was served in the case of former Minneapolis policeman Mohamed Noor, who was convicted of killing a white woman, other say race played a heavy role 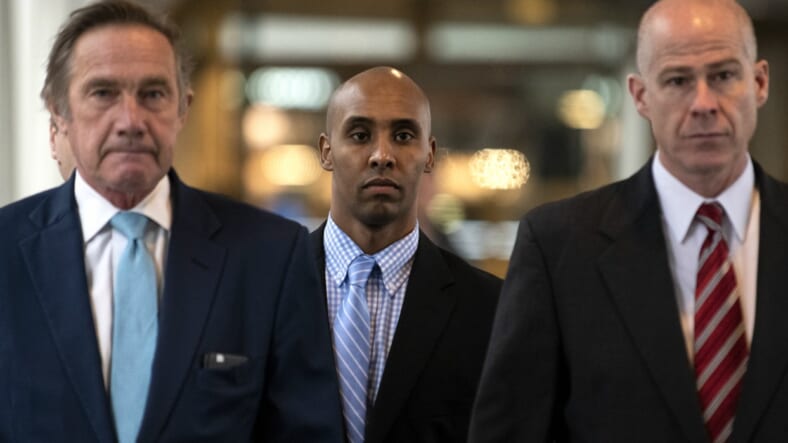 Mohamed Noor and his legal team arrive at the Hennepin County Government Center after the jury reached a verdict on April 30, 2019 in Minneapolis, Minnesota. Noor is charged with second-degree intentional murder, third-degree murder and second-degree manslaughter in the shooting death of Justine Ruszczyk Damond in July 2017. (Photo by Stephen Maturen/Getty Images)

A jury convicted former Minneapolis police officer Mohamed Noor of murder on Tuesday, for fatally shooting a woman after responding to a 911 call she made to report a possible sexual assault.

According to The Star Tribune, Tuesday, a jury took only 11 hours to find Noor, 33, guilty of third-degree murder and second-degree manslaughter in the July 2017 death of Justine Ruszczyk Damond, 40, a white Australian woman who was engaged to a U.S. citizen and held dual citizenship.

Civil rights activist Mel Reeves applauded the verdict saying that it illustrates that, “police shouldn’t be above the law.”

READ MORE: Partner of ex-Minneapolis cop on trial in shooting says he did not assess situation properly

But many have pointed out that the fact that Moor — who held the distinction of being the city of Minneapolis’ first police officer from its Somali American community — is facing up to 16 years behind bars, when white officers often get let off for more egregious offenses does allude to racial bias.

Reeves himself concedes that Noor’s race may have made it easier for the jury to convict him. “He’s Somali. He’s Black. And he’s Muslim — that’s a trifecta.”

“The system has an easier time convicting a black man in a blue uniform,” Reeves continued adding that in police shootings, “this is what should happen all the time.”

After the verdict was read, police chief, Medaria Arradondo, and the police union offered their “apologies” and “condolences” to Damond’s family. But the victim’s neighbor, Sarah Kuhnen also couldn’t help pointing out the disparity in how these cases are treated when the officer is a Black man and the victim is a white woman.

“We have to acknowledge that in our city, most victims of police violence are people of color and that racism and white supremacy are the reasons they don’t receive the treatment Justine received,” said Kuhnen. “What Justine has gotten we want for everyone.”

Despite public sentiment about a double standard, Hennepin County Attorney Mike Freeman dismissed the critique that white officers haven’t been charged in the same manner after killing civilians.

“I’ve heard a small group in the community make disparaging remarks about me and this office to the effect that I won’t charge white cops who shoot Black people, but I’ll charge Black cops who shoot white people,” he said at a news conference after the verdict was announced. “Race has never been a factor in any of my decisions. It never will be. … We have charged white cops for committing crimes, but we look at each case based on the facts, evidence and laws in front of us.”

But an organization of Somali-American officers says that Noor’s race and ethnic background was what was really on trial.

“Officer Noor joined the police force to make a difference and reflect the community he serves. And while historically it has not been uncommon for minority officers to receive differential treatment, it is discouraging to see this treatment persist in 2019,” the Somali American Police Association said through a statement. SAPA fears the outcome of this case will have a devastating effect on police morale and make the recruitment of minority officers all the more difficult.”

Noor was taken into custody after being convicted and Hennepin County District Judge Kathryn Quaintance denied the defense’s request to allow him to stay out on bond. Sentencing is set for June 7.