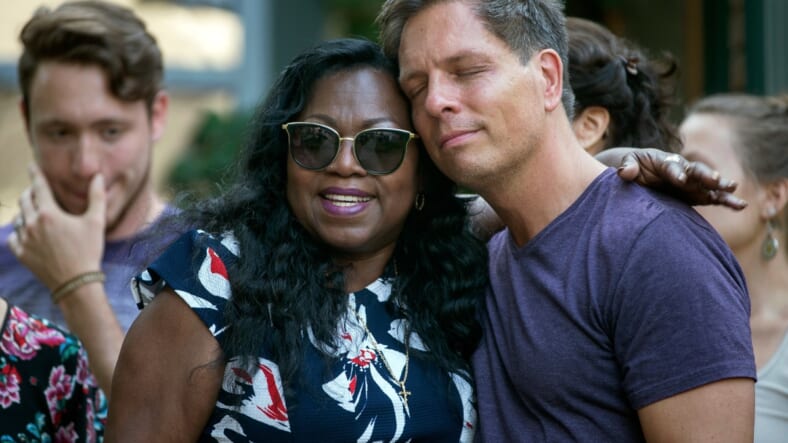 In this July 20, 2017, Don Damond, the fiance of Justine Damond, is comforted outside his home by Valerie Castile, the mother of Philando Castile, as demonstrators march by Damond’s home during a march in honor of Justine Damond. (Aaron Lavinsky /Star Tribune via AP, File)

The shooting death of Philando Castile at the hands of police sparked protests in 2016, but his mother is continuing his legacy of helping others.

Last week, Castile’s mother, Valerie Castile delivered an $8,000 check to Robbinsdale Cooper High School in New Hope, Minn. to help wipe out lunch debts of graduating seniors. Valerie’s gift honored her son who was a cafeteria worker that would sometimes pay off student lunch debt with his own money.

“He’d pay for children’s lunch meals out of his own pocket instead of letting a child go hungry that day he would pay for it himself,” she said.

Castile was shot five times during a traffic stop while trying to comply with the police officer’s commands. His girlfriend Diamond Reynolds and her old daughter were in the car when the shooting took place which Reynolds streamed on Facebook Live. Castile had admitted to having a gun in the car seconds before he was shot. His death sparked national protests against police shootings. Officer Jeronimo Yanez was indicted on several charges, including manslaughter, but later found not guilty on all charges.

Following his death, Valerie created the charity Philando Castile Relief Foundation, which aims to help victims of gun and police violence. Philando Feeds The Children was also created in Castile’s honor and USA Today reports that the organization raised more than $130,000 to pay off the lunch debts for every school in the St. Paul, Minn., school system.

Unfortunately, school lunch debt is a big problem in this country, particularly in low-income communities. According to USA Today, a national survey done by the non-profit organization School Nutrition Association found that more than 75% of school districts reported having unpaid student meal debt at the end of the 2016-17 school year.