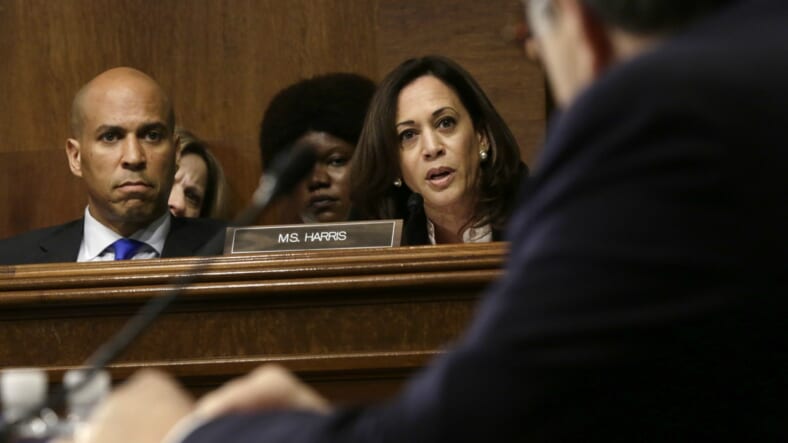 Following days of congressional testimony by Attorney General William Barr, Sen. Kamala Harris has taken the first step to look into what she believed to be troubling statements by Barr.

On Friday, Harris sent a letter to the Justice Department Inspector General Michael E. Horowitz requesting an investigation into Barr to determine if he had acted upon President Donald Trump’s request or suggestions to look into who he perceived to be “enemies.”

According to CNN, Harris cites the findings in special counsel Robert Mueller‘s report and Barr’s Wednesday congressional testimony as to the reasons for her letter.

“Such inappropriate requests by the President have been well documented,” Harris wrote. “Special Counsel Mueller documented a disturbing pattern of behavior on the part of the President repeated attempts to target his perceived opponents.”

Harris went on to write that the Department of Justice should not bow to requests by the president for his personal vendettas.

“There must be no doubt that the Department of Justice and its leadership stand apart from partisan politics, and resist improper attempts to use the power of federal law enforcement to settle personal scores,” Harris wrote.

Harris also pointed out details in Mueller’s report that notes at least three occasions where Trump called for an investigation into Hillary Clinton, whom he ran against him in the 2016 election.

The letter followed several days of heated exchanges between the Democratic presidential candidate and Barr about his conversations with Trump. In one instance, CNN reported, Harris questioned whether the White House has “asked or suggested” that he open an investigation into anyone.

“I’m trying to grapple with the word ‘suggest,'” Barr said Wednesday at the hearing. “I mean, there have been discussions of, of matters out there that, uh — they have not asked me to open an investigation, but…”

Harris is not the only calling out Barr for inconsistencies, according to CNN, House members Ted Lieu of California and Kathleen Rice of New York are asking the state bars in Virginia and Washington, DC, to begin ethics investigations into Barr following his recent congressional testimony.

Republican Sen. Lindsey Graham, who is the chairman of the Senate Judiciary Committee, has sent a letter to Mueller asking if he believed Barr misrepresented a phone conversation in his testimony this week.