Praise from one queen to another. 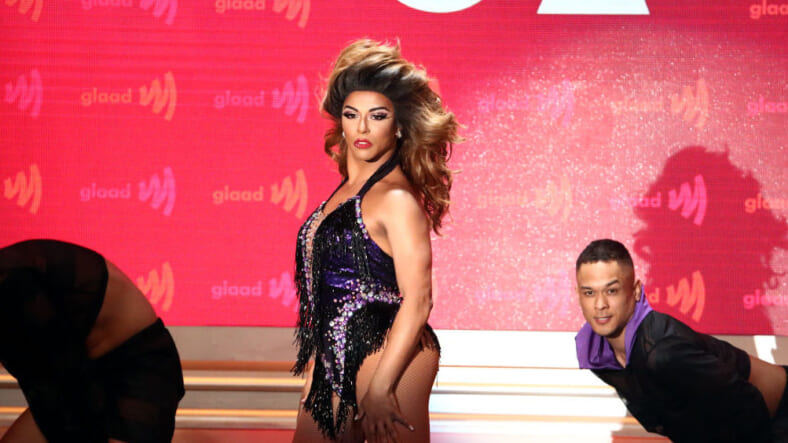 The Queen Bey has blessed Shangela, a professional drag queen, by posting a clip of her participating in the #BeforeILetGoChallenge.

Beyoncé had been posting her favorite clips of people taking part in the challenge, which was prompted by Beyoncé’s rendition of the Frankie Beverly and Maze 1981 classic “Before I Let You Go,” which she released as a bonus song on Homecoming: The Live Album. In the updated version of the song, Yonce gives her fans instructions for a themed line dance, but since there’s no video, she doesn’t show them how it’s done.

So, fans are shooting their own videos to show her how they interpreted the moves.

We Did It!! ? The @beyonce #BeforeILetGoChallenge choreo: @msilas23 edit: @dekellazimilev #Homecoming #Netflix #Shanchella (and it goes without saying but I ❤️ Beyonce!)

READ MORE: The latest death on ‘Game of Thrones’ has Black fans pouring out a little liquor

When Beyoncé posted Shangela’s rendition, the drag queen lost her mind. In her own IG post, Shangela writes: “Y’all. YALLLLL!!! My heart is SO HAPPY right now. The Queen BEY posted our vid on her IG story. So Cool! I luv her sooo much and her work ethic inspires me on the daily,” before shouting out her choreographer, dancers, video photog and editor and for her costume designers.

Shangela took the #BeforeILetGo challenge to her performance at Jeffrey Sanker’s White Party in Palm Springs on Sunday. She started off by showing a video montage with clips from RuPaul’s Drag Race before performing her song “Werqin’ Girl.” She also performed mixes to Cardi B’s “Money,” and Rihanna’s “Bitch Better Have My Money.”

In the second part of her show, Shangela, performed “Before I Let Go.” It was this clip that caught Beyoncé’s eye and prompted her to repost on her Instagram Stories.

This isn’t the first time Beyoncé has given Shangela her due.

In March, at the GLAAD Media Awards in Los Angeles, Shangela entertained the crowd by paying tribute to Beyoncé’s music. In fact, she brought the house down and received a standing ovation by Bey herself.

Shangela said Beyoncé went backstage after the performance and told her she might be stealing some of her choreographed transitions.