Beyoncé and Jay-Z get personal in GLAAD Awards acceptance speech

Who you take to Red Lobster is your business. 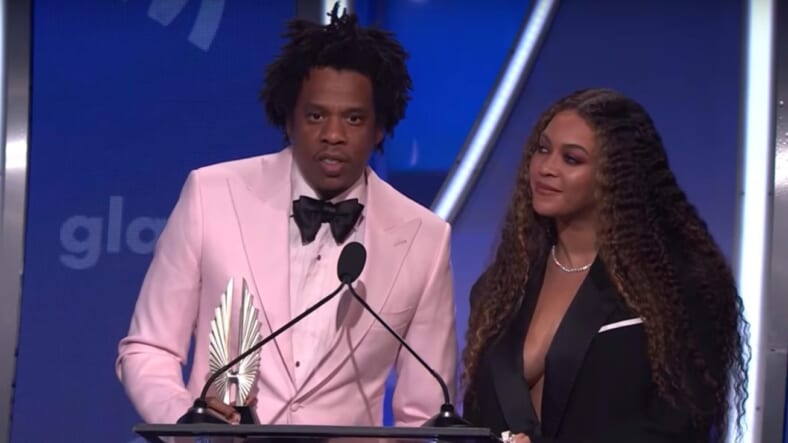 Prior to the powerhouse couple taking the stage on Thursday night, Shangela, who is a RuPaul Drag Race all-star and  actor in the Academy Award nominated film A Star is Born, took to the stage to perform a  very well-received, seven-minute medley of Beyoncé songs.

OMG. @itsSHANGELA IS PERFORMING A BEYONCÉ MEDLEY IN FRONT OF BEYONCÉ AT THE #GLAADAWARDS. pic.twitter.com/VNS0oGurxF

Following the act, HIV activist, Morris Singletary, Janet Mock along with Beyoncé’s long-time stylist Ty Hunter and Lena Waithe also sang tributes to the couple for their activism. Waithe calling them, “the most powerful Black couple,” but jokingly claimed they may have to fight to the Obamas for the title.

Once Jay-Z and Beyoncé got on stage, they took the time to mention their personal ties to the LGBTQ community. Jay-Z chose to talk about his mother, who came out as a lesbian several years ago. The “99-Problems” rapper dedicated the groundbreaking track “Smile” from his 4:44 album to his mother Gloria Carter. His mother recited a powerful poem at the end of the track and received a Special Recognition Award from GLAAD in 2018.

“I get to follow in her footsteps for spreading love and acceptance and her beautiful speech at the end of the song and for allowing me to tell her story,” he said.

Wife Beyoncé would go on to praise her husband for going against the underlying homophobia that is prevalent in rap music and encouraged people to remember that facilitating change begins closer to home.

“Change starts with supporting people closest to you,” Beyonce said.

Beyoncé also called on the Black community to shift the stigma associated with being LGBTQ and encouraged parents to love their children for who they truly are.

“We would like to request that we continue to shift the stigmas in this community,” she said. “Especially the stigmas in black families towards accepting queer black and brown men and women around the world.”

The “Formation” singer got emotional when talking about her Uncle Johnny, who she said was gay and proud during a time when it was not as accepted. She went on to say he helped raise her and her sister Solange and watched him battle with HIV.

Before the close of her speech, Beyonce added, “Who you make love to and take that ass to Red Lobster is your human right” which Deadline reports was met with uproarious hoots, hollers and applause from the crowd.

Watch a snippet of Beyonce and Jay-Z’s speech below: