Missing Missandei on ‘Game of Thrones’ 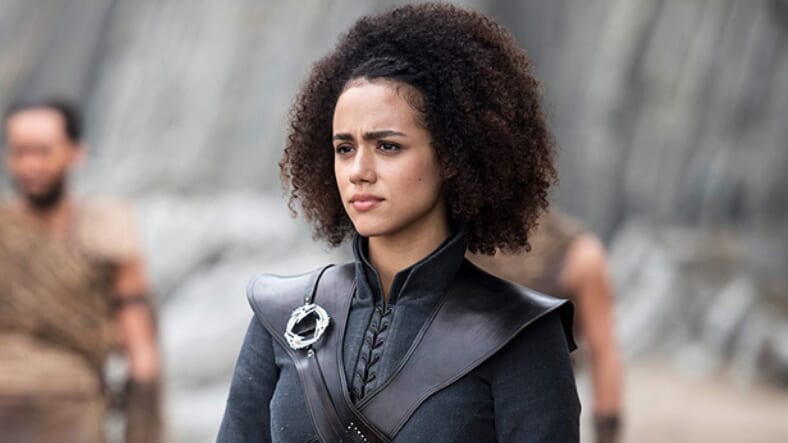 Right now, there are as many dragons in Westeros as there are people of color.

Last Sunday’s episode, “The Last of The Starks” could have also been titled “The Last of the Black People.” There’s only one sister on the show, the translator Missandei. One time when I took my nephews to a Game of Thrones premiere party, Nathalie Emmanuel, who plays Missandei, was the only actress they made a beeline to meet. Spoiler alert–Missandei ended her run on the show in chains, beheaded, and dumped off the walls of a city. Her boyfriend Grey Worm–the only other person of color with a major role on the show this season–had to watch helplessly.

I love me some Game of Thrones. But after that episode I was a little bit in my feelings.

I don’t know where Game of Thrones is going plot-wise as it airs its final two episodes. But unless Missandei gets raised from the dead–which seems unlikely since all the main characters with the power to raise people from the dead have been killed–there’s no way to make her character arc into a feel good story. Missandei’s season ended worse than LeBron James’ did.

After the episode aired, movie director Ava DuVernay tweeted “So… the one and only sister on the whole epic, years-long series? That’s what you wanna do? Okay.” Emmanuel retweeted DuVernay with four emoji hearts. Not one, not two, not three–four emoji hearts. That’s real talk. She was basically agreeing that she got done wrong.

Some folks might argue that Game of Thrones is not about race. But it’s not not about race either. And we know that pretty much everything is about race, especially the stuff that isn’t. Earlier in the season, Missandei and Grey Worm got so sick of other characters watching them the way department store detectives watch black shoppers that they talked about moving out of the country. They didn’t say it was about race, but we knew it wasn’t not about race.

There are some black authors out there representing in the world of sci-fi and fantasy–Marlon James, N.K. Jemisin, and Tomi Adeyemi to name a few. That’s a good start, but more needs to be done if we want fantasy to be as colorful as reality.

Don’t get me wrong. I love George R.R. Martin and I’m going to keep watching Game of Thrones to the end, and when the final books come out–if they ever come out–I’m going to read those too. I’m ride or die with Sansa, Arya, Jon, Tyrion, Dany, Grey Worm and the rest of them. But that doesn’t mean I can’t fantasize about fantasy getting even better.

Missandei’s last word before her beheading was “Dracarys,” which means “Dragonfire” in High Valyrian, one of the fantasy languages on Game of Thrones. Basically, she was saying it was payback time, and her dragon queen friend needed to burn everything down.

Sister, I feel your pain.

C.J. Farley is the author of Game World, a fantasy adventure novel, and Around Harvard Square, a new novel about class, race and admissions in the Ivy League.