Reports say the anticipated book on the president's White House tenure may not be released until next year, when the presidential campaign is well under way 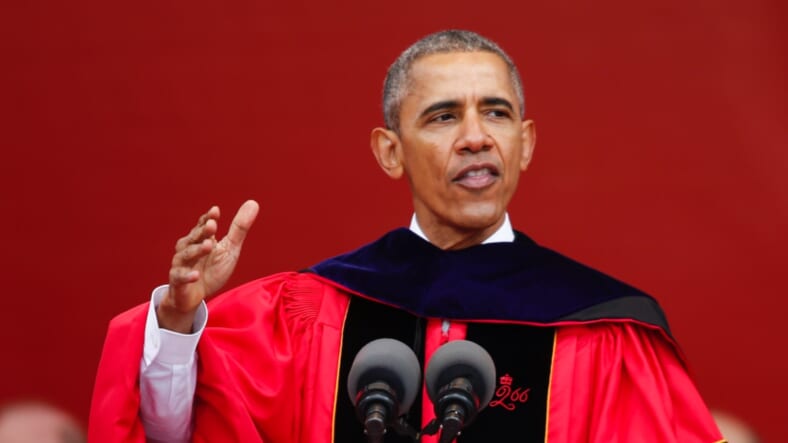 U.S. President Barack Obama speaks to students and attenders after receiving an honorary doctorate of laws during the 250th anniversary commencement ceremony at Rutgers University on May 15, 2016 in New Brunswick, New Jersey. Obama is the first sitting president to speak at the school’s commencement. (Photo by Eduardo Munoz Alvarez/Getty Images)

It appears former President Barack Obama’s post-presidency memoir, which some slated for a release this year, will more than likely come out in 2020 instead.

The followup to Obama’s debut book and best-seller, “Dreams from My Father,” may have to wait another year. While it had been noted that he had already handwritten a first draft on legal pads, according to the Associated Press, publisher Penguin Random House has already started reaching out to foreign partners and others about the pending status of the memoir’s actual release.

Both Obama and former first lady Michelle Obama, signed with Penguin Random House in 2017, and were said to have penned lucrative deals for their books.

News of the memoir’s delay now increases the likelihood that it Obama’s post-White House memoir will instead come out in the middle of the 2020 presidential campaign. The timing of the tentative release proves tricky, as a book could place the former POTUS back into the spotlight during the 2020 presidential election, despite Obama having not endorsed former Vice President Joe Biden or any other candidate.

But as the most popular Democrat in the country, even more than three years after leaving office, Obama’s every word about the campaign will be scrutinized for signs of which candidates he favors.

In the meantime, back in March, the former FLOTUS’s book, “Becoming,” was reported by Penguin Radom House Bertelsmann’s CEO, Thomas Rabe, to be on its way to rank as one of the best selling memoirs of all time. It has sold over 10 million copies since its release in November.

“That makes it our most notable creative success of last year,” Rabe told a news conference, recently.

According to a source from Penguin, the publisher did not give partners any additonal updates on a new launch date.