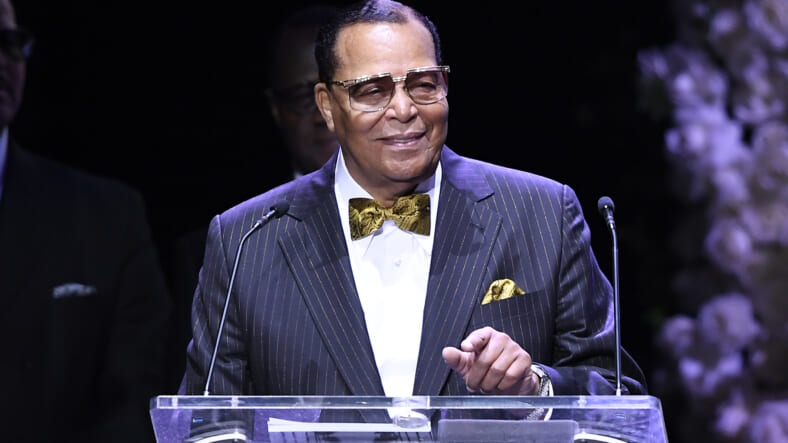 Honorable Minister Louis Farrakhan, National Representative of The Honorable Elijah Muhammad and The Nation of Islam, speaks onstage during Nipsey Hussle's Celebration of Life at STAPLES Center (Photo by Kevork Djansezian/Getty Images For All Money In Records and Atlantic Records)

Catholic priest, Father Michael Pfleger has invited Minister Louis Farrakhan to speak at St. Sabina Catholic Church in Chicago, on Thursday after the minister he was banned from Facebook last week.

According to the Chicago Tribune, Pfleger has offered the longtime leader of the Chicago-based Nation of Islam, to share his thoughts at the church on Thursday at 7 p.m.

Pfleger said Farrakhan has accepted the invite and is requesting for people in attendance to share Farrakhan’s comments on Facebook live.

“I get very concerned when we start to live in a country where free speech is taken away,” Pfleger said in a Monday interview.

On Twitter last week, Pfleger wrote that he stands and supports Farrakhan:

“How dare FB BAN Minister Louis Farrakhan while daily I come across Racist, Violent  and Hateful comments and postings…I STAND WITH MY BROTHER….Mr. Zuckerberg your hypocrisy and  double standards are disgraceful  #lifttheban    #supportfarrakhan”

How dare FB BAN Minister Louis Farrakhan while daily I come across Racist, Violent and Hateful comments and postings…I STAND WITH MY BROTHER….Mr. Zuckerberg your hypocrisy and double standards are disgraceful #lifttheban #supportfarrakhan

Farrakhan was among one of the figures who was banned from the platform because the accounts “violated its terms of service against hate and violence.”

“We’ve always banned individuals or organizations that promote or engage in violence and hate, regardless of ideology. The process for evaluating potential violators is extensive and it is what led us to our decision to remove these accounts today,” said a Facebook spokesperson last week.

Many people, including celebrities and other high-profile figures, have openly criticized Facebook’s decision.

Facebook decided to ban the individuals because the accounts violated its rules and policies against “dangerous individuals and organizations.” The company also stated that it has removed their content when it violated Facebook rules in the past, the Chicago Crusader reports.