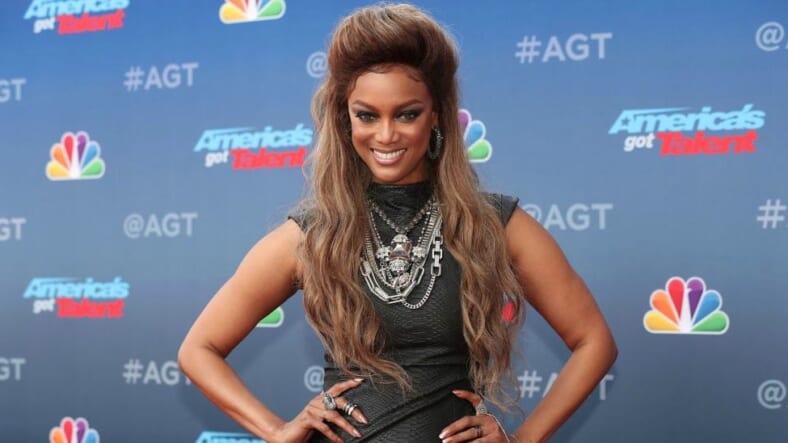 Looking like every bit of a grown woman, Tyra Banks made once again graced the cover of Sports Illustrated, 22 years after making history as the first Black woman to ever do it solo.

“Being the first Black woman on the cover, I didn’t dream it because I never thought it was possible,” Banks said.

“Just like this, I’m 45 years old and I’m on the cover of this magazine again?”

Banks who modeled first for SI in 1993, landed on the cover in 1996 with Valeria Mazza. However the next year, a young Banks made the cover by herself in a polka dot bathing suit looking beachy and breezy for the Harbour Island, Bahamas photoshoot.

Now she’s back and while the new mom admits she’s got a little more cushion in her breast and butt area, she looks stunning and voluptuous in her photos which includes one wearing a polka dot bikini like did decades earlier to celebrate her return to SI.

“Tyra Banks is the epitome of what we hope for all the women who are a part of Sports Illustrated Swimsuit,” said editor MJ Day. “What she has achieved so far in her career is extraordinary. She has parlayed a modeling career into phenomenal success that spans multiple industries and resonates with people on a global scale. She has refused to be singularly defined and is constantly working to inspire everyone within her reach.”

READ MORE: Tyra Banks says she hopes her son doesn’t want to be a model—

Banks, a mom, mogul and model said what’s different these days is: “Well, my body’s different, my boobs are bigger, the booty is bigger. Everything’s a little bigger. So that made it at first, I was like I got more stuff to work with and at first it was a little bit more difficult but after the first shot I was like, I got this.”

Banks has been so influential in modeling and long after. We’re glad to see she’s still making major moves.

Olympic gold medal gymnast Simone Biles is also returning to the SI Swimsuit issue with a photoshoot done in Puerto Vallarta, Mexico with photographer Walter Chin. She was first featured in 2017.

Olympic gymnast @Simone_Biles returns to #SISwim and she’s not afraid to prove that strong is sexy https://t.co/bZoDVvnXDm pic.twitter.com/qwcT12d7Rj