Farrakhan condemns Facebook ban but maintains, ‘I do not hate Jewish people’

Despite anger over hosting the controversial Nation of Islam leader, Saint Sabina church gave him a platform to respond to being banned by the social media giant 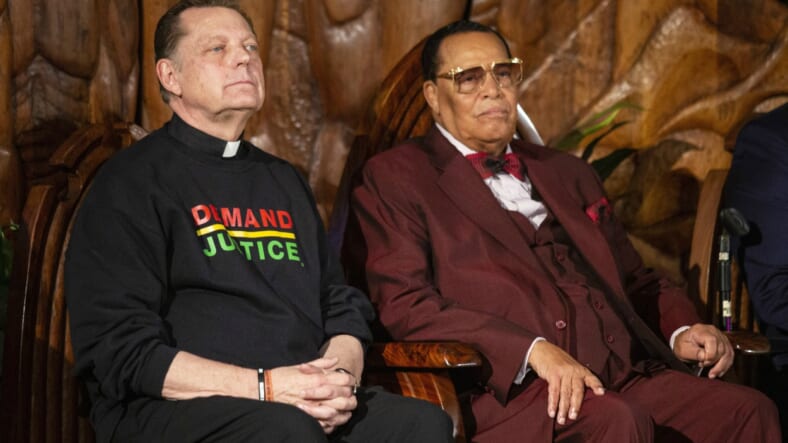 Father Michael Pfleger sits next to Minister Louis Farrakhan, of the Nation of Islam, before they both speak at Saint Sabina Church, Thursday night, May 9, 2019, in Chicago. (Ashlee Rezin/Chicago Sun-Times via AP)

Days after Facebook banned Minister Louis Farrakhan and other leaders after being accused of engaging in anti-Semitic hate speech, the Chicago-based Nation of Islam leader told a crowd at a church on the city’s South Side Thursday night that he makes a distinction between who he criticizes.

“I’m here to separate the good Jews from the satanic Jews,” the Chicago Tribune reports Farrakhan said to the audience at St. Sabina Church as he condemned the decision by Facebook.

“I have not one word of hate,” Farrakhan said. “I do not hate Jewish people. Not one that is with me has ever committed a crime against the Jewish people, Black people, white people. As long as you don’t attack us, we won’t bother you.”

Farrakhan told the crowd that he should not be punished for bringing to light injustices committed against Black people.

“The enemy is so hateful of me,” he said. “I have never been arrested, no drunken driving. What have I done that you hate me like that?”

Farrakhan was one of a number of controversial figures banned permanently from Facebook and all its platforms, including Instagram, for speech that Facebook said violated its terms of service. Farrakhan denied during his speech that he had ever used social media to spread hate. His Facebook page and Instagram accounts had more than 1 million “likes” and followers, the Tribune reports. His account on Twitter, which is not owned by Facebook, remained active on Friday and has 339,000 followers.

Regarding Facebook, Farrakhan told his audience, “I used that platform with respect,” and he added, “I never allowed those who follow me to become vile as those who speak evil of us.”

In his speech, Farrakhan remarked on historical injustices committed against Black people and was not attacking whites, but wanted to point out the difficulties Blacks have dealt with. He also had praise for his host, Rev. Michael Pfleger,

“I’m here by God’s permission to tell all of you what justice looks like,” Farrakhan said. “It’s not a white woman, a TV show, and a nice car and a nice home…I love you and God loves you and wants to free you from the grip of Satan, that we may build a righteous world and Father Pfleger will be in that righteous world.”

Pfleger, a Roman Catholic priest and activist and the head of St. Sabina, told the crowd that he had been admonished for inviting Farrakhan to speak.

“This past week, I have been cursed at, received an overwhelming amount of hate calls, emails, hateful Facebook postings,” said Pfleger at the event. “It is dangerous to me when we begin to stop free speech and seek to silence prophetic voices.

“There are many who say they do not like Minister Farrakhan because all they have heard is various sound bites. Perhaps that is why Facebook wanted to ban him — to keep people from hearing his whole talk, his entire message and the truth that he seeks to teach us.”

The Archdiocese of Chicago distanced itself from Pfleger’s decision to invite Farrakhan to St. Sabina Catholic Church, saying Pfleger did not consult with archbishop Cardinal Blase Cupich or other diocese officials before extending the invitation.

“There is no place in American life for discriminatory rhetoric of any kind,” the archdiocese said in a statement. “At a time when hate crimes are on the rise, when religious believers are murdered in their places of worship, we cannot countenance any speech that dehumanizes persons on the basis of ethnicity, religious belief, economic status or country of origin.”