The racist roots of the anti-abortion movement explained 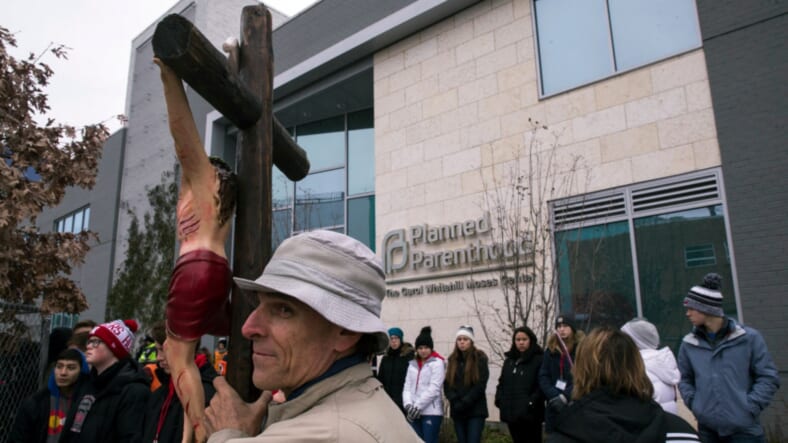 Richard Mahoney of the Pro-Life Shrine of the Immaculate Conception and American Holocaust Museum holds a crucifix during a protest vigil sponsored by The Christian Defense Coalition and Priests for Life outside of the Planned Parenthood of Metropolitan Washington, D.C., Carol Whitehill Moses Center on January 17, 2019 in Washington, DC. (Photo by Zach Gibson/Getty Images)

Alabama has passed a controversial anti-abortion law which jails doctors who perform abortions for life, and denies abortion rights to victims of rape and incest.

It’s one of the most restrictive abortion law on the books in the United States. Many other states have already rolled back abortion rights or are following Alabama’s lead, despite Roe V. Wade (1973) having declared it a constitutional right.

“Don’t shake your head at Alabama,” tweeted acclaimed SELMA director Ava DuVernay after the ruling. “Realize that this is a warning. It’s Alabama and abortion today. It’s you and your rights tomorrow.”

Don’t move forward after reading this like everything is normal. Don’t shake your head at Alabama and then keep going about your day. Realize that this is a warning. It’s Alabama and abortion today. It’s you and your rights tomorrow. Your silence will not save you. So speak up. https://t.co/kIz78uAU1T

DuVernay’s stance that abortion is just a stand-in for larger issues in America is a view similar to Professor Randall Balmer, who teaches religion at Dartmouth University.

Balmer says that the anti-abortion movement in the U.S. has everything to do with evangelical Christians’ racist segregationist roots and less to do with the tenants of morality.

“This movement was born out of a desire to defend racial segregation at places like Bob Jones University and segregation academies such as Jerry Falwell’s Academy in Lynchburg Virginia,” Balmer tells theGrio in an interview.

These Christian schools did not initially admit African-Americans and eventually ran into trouble with their tax exemption status from the IRS.

The “government interference” got many white Christian evangelicals to mobilize, and President Jimmy Carter, became their political target for punishment.

“Evangelical leaders… seized on abortion not for moral reasons, but as a rallying-cry to deny President Jimmy Carter a second term,” writes Balmer in a POLITICO article called “The Real Origins of the Religious Right.”

Balmer says that evangelical leaders waited a whole six years after Roe V. Wade to organize against abortion because the movement wasn’t truly about abortion, but political power.

He says a similar desire for political power today, has allowed them to give a pass to President Donald Trump.

“Racism was baked into the religious right. And anytime you have racism that is not addressed it festers. And if you look at it from that perspective I think the 2016 election [of Donald Trump] probably is not all that surprising.”

According to a recent survey from Pew Research Center, 6 out of 10 Americans believe abortion should be legal in all or most cases.

READ MORE: Why every Black woman in America should be concerned about Alabama’s abortion ban

However, when you look closely, 61 percent of white evangelical Protestants strongly oppose abortion in all or most cases, saying it should be illegal.

Balmer says many Evangelicals have effectively used media to promote the message that abortion is a moral issue, while obscuring other motivations.

“I’m not dismissing the possibility that some even many people who align themselves with this movement have real convictions on this abortion issue,” Balmer says.

In the late 70’s, the religious right only picked abortion as their new fight because it had lost their fight for segregation.

It was never about morality. It was always about control.

— brittany packnett cunningham does not do remixes. (@MsPackyetti) May 15, 2019

“You have to come to terms with the fact that you supporting not only a president but a Supreme Court nominee who has been credibly accused of sexual assault. How is that pro-life?”

History aside, the urgency of the moment isn’t lost on pro-choice advocates who see another political strategy at work.

“This administration and conservative state admins have been quietly taking over courts to create conservative majorities that side with the “religious right” for such a time as this,” tweets activist, Brittany Packnett.

“They’ve been playing the long game-knowing they’d be coming for Roe through the states.  If the jig ain’t up for y’all yet…”

In the late 70’s, the religious right only picked abortion as their new fight because it had lost their fight for segregation.

It was never about morality. It was always about control.

— brittany packnett cunningham does not do remixes. (@MsPackyetti) May 15, 2019