OPINION: When Alabama passed an abortion law that seems to point the decades long debate back toward the Supreme Court, it also created another gauntlet for African American women to run 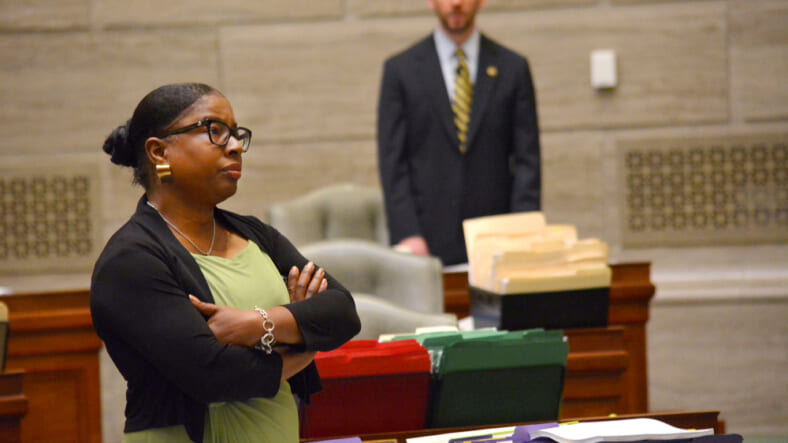 Rose Afriyie, a National Organization for Women (NOW) field organizer from Washington D.C., protests at a 2006 Operation Save America demonstration to close the only abortion clinic in the state of Mississippi. (Photo by Marianne Todd/Getty Images)

This week women all over the country woke up to the news that Republican Alabama Gov. Kay Ivey, had signed the most stringent abortion legislation in the country, effectively making it a felony to perform an abortion in nearly all cases.

Women’s rights activists and lawmakers quickly spoke up against this extreme turn of events, while different religious sects debated whether the decision was valid for spiritual reasons.

Everyone basically showed up to this argument the way they usually show up, giving the speeches they usually give. But underneath the vocal minority passionately unpacking what had just taken place, I couldn’t help but notice a quieter — and much larger — group of women who appeared to dismiss this bit of legislation as just another horror story about life in the southern “Bible Belt.”

And that overall sentiment of, “What does this have to do with me?” concerns me. It would be incredibly naïve for anyone to think that that what happened in Alabama on Wednesday is just about Alabama. Because we’ve seen time and time again that what the GOP lacks in public support or celebrity endorsements, they more than make up for in cunning execution.

This abortion ban was just a warning shot and below I’m about to explain three reasons why all women in this country, particularly Black women, need to be concerned about what’s on the horizon.

They’re chipping away at Roe vs. Wade

The other day I was watching a documentary about Ruth Bader Ginsburg and how she strategically made the country’s highest courts recognize that lawmakers were systemically discriminating against women.

One particularly notable case was that of Weinberger v. Wiesenfeld, in which she claimed a widowed husband was being kept from receiving his wife’s benefits after her death, because the strict gender rules imbedded in the tax laws only gave those benefits to women with deceased husbands.

By successfully arguing that all widowed spouses should get access to benefits regardless of gender, the scrappy attorney chipped away at the very idea that gender bias should be written into laws at all. As a result, lawmakers had to make it illegal to discriminate against anyone on the basis of their gender.

This was undoubtedly a brilliant (and patient) strategy on RBG’s part.  And ironically, decades later, the same tactic that our fave Supreme Court Justice used to help free women from sexist laws and civil rights violations, is now being flipped to bring them all back.

As many before me have pointed out, for a generation the GOP has been actively seeking to reverse the landmark 1973 Supreme Court ruling that state laws banning abortions were unconstitutional.

This one case changed everything and made abortion legal in many circumstances where it had been flatly forbidden. So by essentially flipping a middle finger at Roe v. Wade this week, Alabama’s governor just set a dangerous precedent that Republicans are already attempting to replicate elsewhere.

In fact, just hours after Alabama signed its abortion ban, Missouri’s Senate also passed an 8-week abortion ban that doesn’t include exceptions for incest or rape.

Hours y’all. Within hours of the warning shot the next attempt was already made. And in the first four and a half months of this year, nearly 300 bills attempting to restrict abortion have already been filed in 46 states.

It begins….. I'm so excited to witness Roe vs. Wade slowly get overturned in my lifetime. God bless you Alabama! #ProLife https://t.co/PFUe0u6eGm

That was not a coincidence, but instead a well thought out plan that’s just getting underway. They are not playing with us! And in the coming months even more GOP lawmakers all over the country are going to pull this same stunt. Mark my words.

This is a full blown assault on women’s reproductive rights and suddenly all those jokes about Trump ushering in an era akin to The Handmaiden’s Tale, don’t feel so funny after all.

This issue is a smoke screen

When Meghan McCain talks about abortion with her co-hosts on The View, she makes it a point to state that not all women believe in abortion rights.

“I think you have to understand for pro-life women like me—which is a strong tenet of who I am I and how I view the world—is I believe abortion is murder,” McCain huffed during Monday’s broadcast. “The idea there is gray in allowing murder in the United States of America…”

So that’s the stance of McCain and many on her side of this debate. Abortion is murder to them, period. While I don’t personally agree that this is a black and white issue, I do think those colors will matter tremendously as it pertains to who’ll be targeted when it’s time to enforce these stricter laws.

This country already has a nasty habit of disproportionately punishing Black people for the same crimes committed by their white counterparts. So this is yet another place where that racial bias gets to now show its ugly head.

‘The state of Alabama ought to be ashamed of herself.’ — These Alabama state senators spoke up against the abortion ban pic.twitter.com/tRPJAXZDvt

In fact, racial biases popping up in abortion laws is nothing new. Back in 2014, the NAACP and the National Asian Pacific American Women’s Forum (NAPAWF) challenged a law in Arizona that they believed relied on harmful racial stereotypes to stigmatize, shame, and discriminate against Black and Asian American and Pacific Islander (AAPI) women seeking abortions.

“This law is a wolf in sheep’s clothing,” Miriam Yeung, executive director of the National Asian Pacific American Women’s Forum said at the time. “This law is not about equality or women’s health. It’s about advancing an anti-abortion agenda by shaming and demeaning Black and AAPI women. The politicians behind this law do not care about improving the lives and health of women and girls. They are just exploiting women’s personal and private health care decisions to score political points.”

Five years later and Yeung’s words ring even more true now. This new wave of anti abortion legislation isn’t just about women’s health, it’s about control. It’s about allowing old white men just one more way to take ownership of what isn’t theirs, while providing “scared” white women another excuse to pick up their cellphones and call the police.

“Hello officer, this Black woman at Starbucks looks like she’s had an abortion. Can you please come arrest her? I don’t feel safe.”

Yes, even rich Black women will be affected

Let’s call a spade a spade, when it comes to any sort of public healthcare crisis rich Black people may understand the debate mentally, but deep down aren’t tripping because they can personally afford better than the average man.

Yet when it comes to unleashing a nation-wide attack on reproductive rights on top of the existing disparity in care that Black women face from the medical community, past a certain point neither of those things cares how rich you are.

If you don’t believe feel free to check out Serena Williams’ traumatic story about how she saved her own life during childbirth. All because she had to fight with her doctor to give her the quality of care she knew she needed.

If we end up in a world where women have to leave country or go on the black market to get abortions thats going to impact all of us and our daughters. On Tuesday, 25 white men decided that the women of Alabama — 700,000 of whom are Black — weren’t equipped to make choices about what happens to their own bodies.

“Alabama already suffers from a dire OB-GYN shortage and skyrocketing infant and maternal mortality rates — Black women are dying from cervical cancer, at twice the rate of white women, and from pregnancy and childbirth more than four times as often. But in the face of public health crises that are killing our mothers, our sisters, and our friends, Alabama politicians are focused on controlling our health care decisions and jailing our doctors –– instead of saving our lives.”

In the same way we all know, “When you empower a woman, you empower a nation,” what do you think happens when we disempower women? Especially those of us who sit closest to the bottom of the food chain?

I can’t state this enough, but this is about so much more than abortion. And underlines with glaring clarity just how important the upcoming election is.