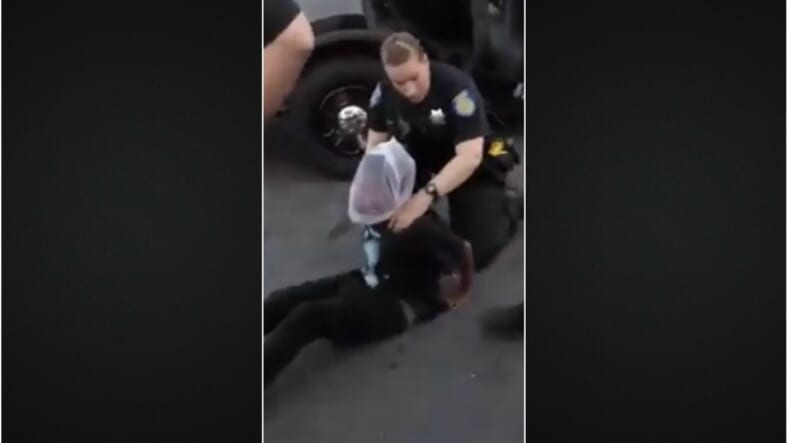 A Facebook video shows a 12-year-old boy being apprehended by Sacramento police with what appears to be a plastic bag. (Facebook)

After outrage over a video that showed a 12-year-old boy arrested by Sacramento police as he sat with a bag over his head, authorities released a body cam video Wednesday and defended the actions of the officers.

“Our officers involved in this incident appropriately used a spit mask to protect themselves and defuse the situation,” Chief Daniel Hahn said in a statement along with the video, The Sacramento Bee reports.

The young boy was reportedly attending a carnival when he was confronted by private security. It is not clear from the video what he was accused of, but police placed him in handcuffs as he protested being detained.

A man recording the incident questions the police.

“As the officers helped the security guard with detaining the subject, he spit in the face of an officer multiple times,” police said in a statement. “Additional officers responded to the scene to assist.

The boy was arrested and charged with resisting arrest and battery against a police officer.

The boy’s family however is preparing to file a lawsuit, the family’s lawyer, Mark Harris, said Tuesday night.

In the video posted by BLM Sacramento on Facebook, the child can be seen protesting the arrest as he is pinned to the ground.

He’s calmed down by the time another office arrives on the scene who still places the bag over his head as the crowd demands to know why such extreme actions are being taken against the minor.

“Kid spit on me,” the officer can be heard saying. The cop then said the boy spit on her three times which prompted the use of a spit mask to be placed over his head.

His mother later joins in the chorus of cries begging to get cops to take the bag off his head.

The boy was reportedly arrested for shoplifting and he spit on an officer, the cop explains.

“I can’t just let him …” the officer said. “I didn’t want to do that. I’m actually really upset that this happened because he’s a young child. The last thing we would want is to hurt a child.”

“That escalated. That did not need to go this way,” she said.

The incident is still under investigation.