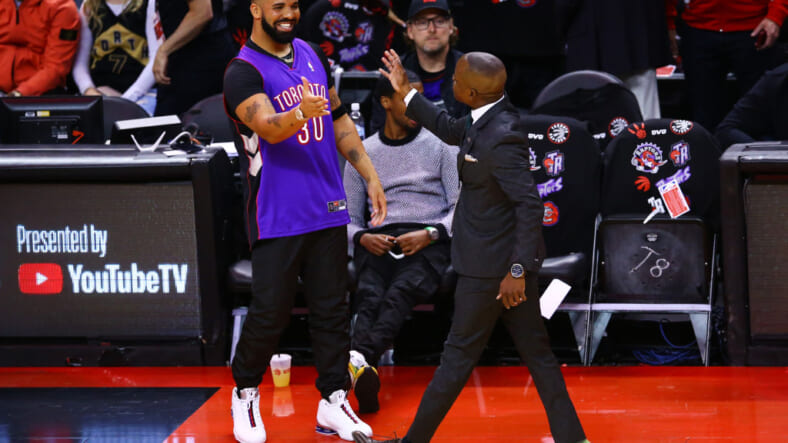 Rapper Drake is seen wearing a Dell Curry jersey before Game One of the 2019 NBA Finals between the Golden State Warriors and the Toronto Raptors at Scotiabank Arena on May 30, 2019 in Toronto, Canada. NOTE TO USER: User expressly acknowledges and agrees that, by downloading and or using this photograph, User is consenting to the terms and conditions of the Getty Images License Agreement. (Photo by Vaughn Ridley/Getty Images)

Superfan Drake was on the sidelines during the NBA Finals as the Toronto Raptors handled the Golden State Warriors and won Game one— and he couldn’t wait to troll a star player.

And Drake of course brought his antics with him. He wore a throwback jersey of former Raptors player Dell Curry, who is Steph Curry’s dad. He picked lint from Curry’s hair and he got into a heated exchange with Golden State’s Draymond Green, which was more of a show than a skirmish.

Drake reportedly said something to the effect of “You’re like trash,” to Green.

“You got a question about basketball?” Green said rebuking a reporter’s question about his confrontation with the In My Feelings rapper, The NY Post reports.

Drake’s had to have a talking to by the NBA brass for his clowning. During Game 4 of the Eastern conference finals he massaged Raptors coach Nick Nurse’s shoulders.

Apparently he’s doing too much.

“Certainly we don’t want fans, friend or foe contacting an NBA coach during a game,” said NBA commissioner Adam Silver. “I think those can lead to dangerous situations. You’re in the middle of coaching a game and you’re completely focused.”

In the end, thing worked out in the Raptors favor after beating the Warriors 118-109. It was 25 years in the making for the Raptors, who gave their fans a long-awaited Game one celebration in their first NBA finals ever.

Drake’s very public love for the NBA Eastern Conference champions Toronto Raptors is as real as Spike Lee’s is for the New York Knicks but he better pipe down before he gets ousted.