Can reparations right the financial wrong against African-American families in Chicago?

Angela Hanks
A recent report says Black Chicagoans lost between $3 and $4 billion in wealth as a result of predatory housing contracts in the 1950s and 60s. (Getty Images)

Black Chicagoans lost between $3 and $4 billion in wealth as a result of predatory housing contracts of the 1950s and 60s, according to a new report.

These reckless sales exploited Black Americans who sought to become homeowners after being left little to no other housing alternatives.

The analysis, published by the Samuel DuBois Cook Center for Social Equity at Duke University, comes on the heels of a renewed debate over reparations sparked in part by the democratic presidential primary race.

–Sen. Kamala Harris gets backlash over question about reparations for African-Americans

In the last few months, multiple candidates have endorsed some form of reparations, with most coming out in favor of legislation to further study the impact of slavery on Black Americans and others fully endorsing monetary compensation.

The analysis also provides another important data point for scholars and advocates seeking to document, assess, and address the massive Black-white wealth gap through reparations or other means.

The difference between median net worth of white families vs. Black families.

Nationwide, Black households hold just one-tenth of the wealth of white households, and the wealth gap persists regardless of income, age, education, occupation, or marital status. Wealth is typically built over generations, which means that wealth inequality is often a representation of both current and past injustices.

Home Is Where the Wealth Is

Housing has long been one of the primary avenues that American families use to build and pass on wealth. Yet for Black families, segregation and discrimination often put homeownership out of reach or made homeownership less lucrative than it is for white families.

When the Federal Housing Administration was created in 1934, it spawned the modern mortgage market by insuring mortgages and ensuring that buyers could borrow at affordable rates.

As a result more buyers were able to build equity that they could then pass on to future generations. Indeed, as the report notes, these policies—along with investments in education, jobs, and healthcare—helped build the thriving white middle class of the 1950s and 60s. 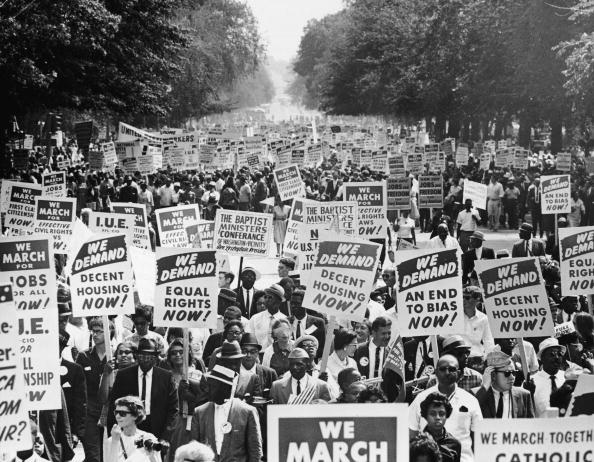 Between 200,000 and 500,000 demonstrators march down Constituition Avenue during the March on Washington for Jobs and Freedom, Washington DC, August 28, 1963. (Photo by Hulton Archive/Getty Images)

However, for decades, FHA-backed mortgages were largely unavailable to Black buyers. The FHA’s practice of redlining—or, systematically identifying Black neighborhoods as too high-risk to qualify for low rates—pushed Black families out of the mainstream mortgage market and into predatory land contracts like the ones documented in the report.

Black buyers who entered into land contracts found themselves at the mercy of predatory sellers. They didn’t own their homes, could not build equity, and did not have any of the property rights afforded to homeowners.

As a result, an entire generation of Black families lost the opportunity to build wealth through homeownership and pass it on to future generations.

Wealth is of course, is just one measure of the harm inflicted by slavery and the structural discrimination that succeeded it. However, it is a useful proxy to quantify both the value of whiteness in America and the effects of structural racism on Black people.

Similarly, while reparations alone cannot reverse the damage caused by structural racism throughout the history of this country, they are an important tool for reconciliation and to help rebalance power and secure a more just future for Black Americans.

Justice demands a redress of past injustice. Reparations are meant to acknowledge and repair the damage that chattel slavery and the racist policies that succeeded it—from Jim Crow, to mass incarceration, to redlining, to Black exclusion from the 20th century public investments that created America’s white middle class, and more—have wrought on Black Americans.

This report adds to our understanding of just how devastating segregation and other forms of discrimination have been.  The question remains, who will have the will to do something about it?

Angela Hanks is the Deputy Executive Director of the Groundwork Collaborative.