Sen. Kamala Harris gets backlash over question about reparations for African-Americans

The interview revealed reparations may be a signature issue for African-American voters in 2020. 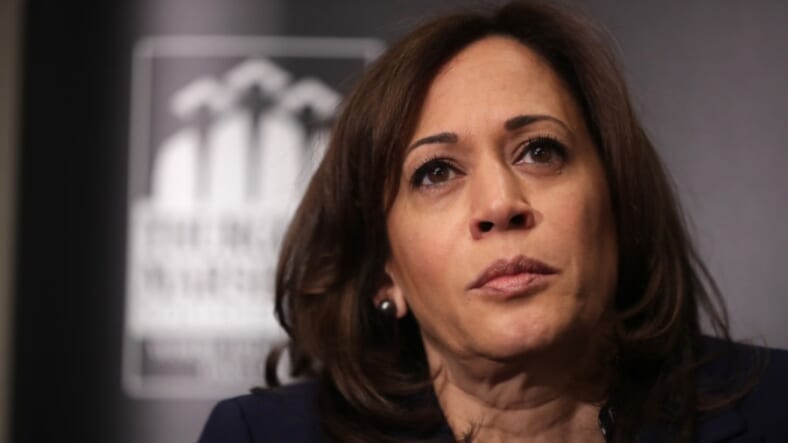 In a recent interview with theGrio at Power Rising 2019 in New Orleans, Sen. Kamala Harris sat for a wide-ranging discussion about her 2020 presidential run, policy agenda for Black America, and plan to beat Donald Trump in 2020 – but it was a question about reparations for African Americans, which sparked an online backlash.

Sen. Harris made national headlines after she told The New York Times she supported reparations for Black Americans.

When asked by theGrio to confirm her support and elaborate on implementing reparations, Sen. Harris responded:

“We had over 200 years of slavery. We had Jim Crow for almost a century. We had legalized discrimination, segregation… We have to recognize that everybody did not start out on an equal footing in this country and in particular Black people have not.

“We have got to do something about that and give folks a lift up. That’s why for example I’m proposing the LIFT Act: Give people who are making $100,000 or less as a family a tax credit, which will benefit and uplift 60 percent of Black families who are in poverty,” she explained.

The LIFT Act is considered to be a wide-sweeping tax plan and cash income program, which on average will provide an additional $500 monthly to working families and single people. It would not impact those who aren’t working and earning income.

Is the LIFT Act Reparations?

Asked about the possibility of a race-based policy beyond the LIFT Act, Harris did not say that there would be one specifically.

“So I’m not gonna sit here and say I’m gonna do something that’s only gonna benefit Black people. No. Because whatever benefits that Black family will benefit that community and society as a whole and the country, right?”

When asked if it was similar to efforts to increase the number of women in the workforce, Sen. Harris agreed:

The backlash from the clip was instant and most pronounced from self-described members of ADOS (American Descendants of Slavery), a growing movement of Black Americans who advocate for a separate policy agenda and reparations for descendants of slavery in the U.S.

“We will not go through what we went through with Obama,” says attorney and writer, Antonio Moore, who is a co-founder of ADOS.

“We are very critical of Kamala Harris’ position in regard to a Black agenda. The LIFT ACT does very little if anything to fix or correct ADOS’ substantial positional problem in regard to wealth,” he continued.

“We’re talking about how we make up the wealth that was lost because the cost that we paid from coming from chattel slaves — and the cost of those chattel slaves paid,” says Carnell.

Some critics have called ADOS divisive and ‘dangerous,’ for its exclusive focus on Black American descendants of slaves.

Others such as a recent commentator on MSNBC, suggested that its members were Russian bots or trolls.  Both Moore and Carnell adamantly deny the claim.

“What [Kamala Harris] is proposing is a way to get herself elected rather than a way to actually coordinate an effort to create a Black agenda,” says Moore.

Some of Sen. Harris’ supporters said reparations for African-Americans is unrealistic in a run against President Donald Trump and criticizing her is counterproductive.

A 2016 Marist poll shows that seven in ten Americans were against reparations for Black Americans who are descendants of slaves.

But the same poll shows that when accounting for the race of participants– more Black people than whites support reparations.

Ultimately the question for all 2020 Presidential candidates is how they will make the Black community’s vote worth their while, and how they will clearly sell that vision to voters.

For African-Americans, the answer won’t be one size fits all.