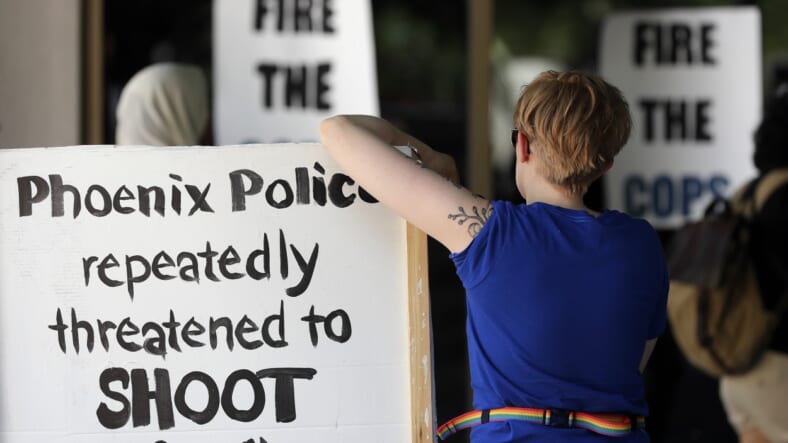 Protesters angered by a video of Phoenix officers who pointed guns and yelled obscenities at a black family they suspected of shoplifting gather outside City Council chambers, Wednesday, June 19, 2019, in Phoenix to demand reforms. Speakers called on the council to fire the officers involved in the videotaped incident and to create a board of civilians to oversee changes in department procedures. (AP Photo/Matt York)

A Black man is stepping forward to say he also was attacked by the Phoenix police officer seen in a viral video using force against a family after their daughter took a doll from a dollar store.

Dante Patterson says he filed a formal complaint against Phoenix policeman Christopher Meyer after he was forced out of an amusement park and pepper sprayed, but adds that the Phoenix Police Department conducted a lackadaisical investigation that found no wrongdoing on Meyer’s part. Meyer is the police officer captured on video in a May 27 incident using force against a young father, Dravon Ames, and his family and shouting at him, “I’m going to put a f—ing cap in your f—ing head!”

Meyer was off-duty but in uniform when Patterson became involved in a minor argument on a bumper boat ride, cursing at some children who bumped into him and splashed him, according to the newspaper.

Patterson says he told Meyer to calm down and Meyer pushed him and told him to get out of the park. Meyer threatened to pepper spray Patterson, so Patterson said he began walking toward the exit.

“He’s following me saying, ‘This is my park! How dare you!’ ” Patterson said. “I turned back toward him and I was like, ‘Man this is crazy. It’s cause you have that badge on you think you can do whatever you want.’ ”

“And he said, ‘Yup, you’re damn right I can do whatever I want,’ then he maced me,” Patterson told the New Times.

In a police report, Meyer claimed that Patterson “postured with his fists clenched” and then he pepper sprayed him.

“They wrote (in their report) that I said Dante did do that, Dante is that type of person, but I said Dante didn’t do that Dante would never raise his fists at a police officer,” Rosario told the New Times.

Police Sgt. Tommy Thompson emailed a statement to the newspaper in which he said Patterson was found to have a .45-caliber pistol on him and that police were not in the wrong.

“The incident was looked into by the Professional Standards Bureau and no misconduct was identified,” Thompson said.

Patterson was legally permitted to carry the gun, according to the newspaper.

Meyer is under investigation after a May 27 violent encounter with Dravon Ames, pregnant fiancee Iesha Harper and their two young children.