Eric Logan's family wants the policeman who killed him held accountable for the fatal shooting, meanwhile the issue is following the South Bend mayor through his presidential bid 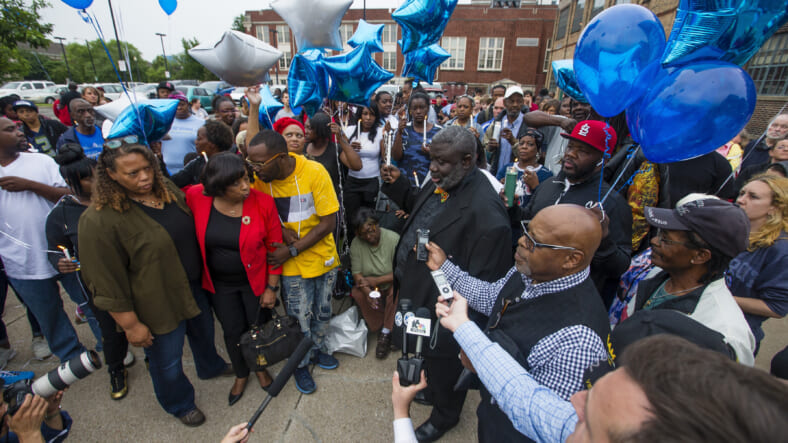 Guests gather and listen to community leaders speak during a vigil for Eric Logan Monday, June 17, 2019 on Washington Street in South Bend, Ind. Logan, 54, was killed in South Bend early Sunday after someone called police to report a suspicious person going through cars, according to the St. Joseph County prosecutor’s office. (Michael Caterina/South Bend Tribune via AP)

A civil rights lawsuit has been filed by the family of a Black man who was fatally shot by a South Bend, Ind., police officer.

The family filed the lawsuit on Wednesday, ABC News reports.

Eric Logan, 54, was killed June 16 when police officer Ryan O’Neill fired his weapon during an incident that took place as the officer followed up on a report of car break-ins in the downtown area.

The officer defended shooting Logan saying he confronted him in a parking lot and only shot him after he threatened him with a knife. But this remains unconfirmed because O’Neill did not have his body camera on at the time of the incident.

The family of the victim strongly opposes O’Neill’s narrative of events.

“The misconduct was objectively unreasonable and undertaken with willfulness and reckless indifference to the rights of others,” the lawsuit stated. “Defendant O’Neill violated Plaintiff’s constitutional rights intentionally subjecting him to unlawful, unequal treatment on the basis of his race.”

The case has drawn national attention not only because of its racial implications but because the city in which it occurred is where Democrat presidential candidate Pete Buttigieg serves as mayor.

Buttigieg has been hammered by residents and outraged community members over the handling of the shooting. At a town hall he attended on Sunday while skipping scheduled campaign stops, he acknowledged his mistakes in dealing with tension between the Black community and the South Bend Police Department.

“The effort to recruit more minority officers to the police department and the effort to introduce body cameras have not succeeded and I accept responsibility for that,” Buttigieg said.

OPINION:  It’s time for Mayor Pete Buttigieg to resign and shut down his 2020 presidential campaign

Logan’s family also blames Buttigieg for failing to properly train officers or hand down a punishment for misconduct.

“You running for president and you want Black people to support you, and vote for you…that’s not going to happen,” one upset resident told Buttigieg at a town hall meeting held last Sunday.

In response, the mayor sent an email to supporters.

“It was a painful but needed conversation. And I feel overwhelmed and heartened by the number of people — supporters and critics — who have reached out and made it clear over the past week that they want to join hands and face these problems together,” the mayor wrote. “Our American values are at stake in the need for us to address the deep mistrust of police and governments among communities of color, which flows directly from the consequences of systemic racism.”

At a news conference late Sunday, he said the circumstance of the shooting would be thoroughly investigated and he called on anyone who may have witnessed the shooting to come forward and to speak to investigators.

“We will be striving to reach out to community members,” said Buttigieg, whose campaign said he canceled plans to speak at a Democratic National Committee LGBTQ Gala in New York on Monday evening.

Logan’s family is seeking undisclosed compensatory and punitive damages. O’Neill has since been placed on administrative leave.

During the second round of Democratic debates Thursday night, he was asked why his police force had not increased from 6 percent Black officers in a city that has a 26 percent African American population.

“Because I couldn’t get it done,” Buttigieg said. “My community is in anguish right now because of an officer-involved shooting — a Black man, Eric Logan, killed by a white officer. I’m not allowed to take sides until the investigation comes back. The officer says he was attacked with a knife, but he didn’t have his body camera on.

“It’s a mess and we’re hurting,” he continued. “And I could walk you through all of the things we have done as a community, all of the steps we’ve taken, from bias training to de-escalation. But it didn’t save the life of Eric Logan.”