OPINION: It’s time for Mayor Pete Buttigieg to resign and shut down his 2020 presidential campaign

Before his appearance at tonight's Democratic debate, politico Sophia Nelson has a message for South Bend's mayor. 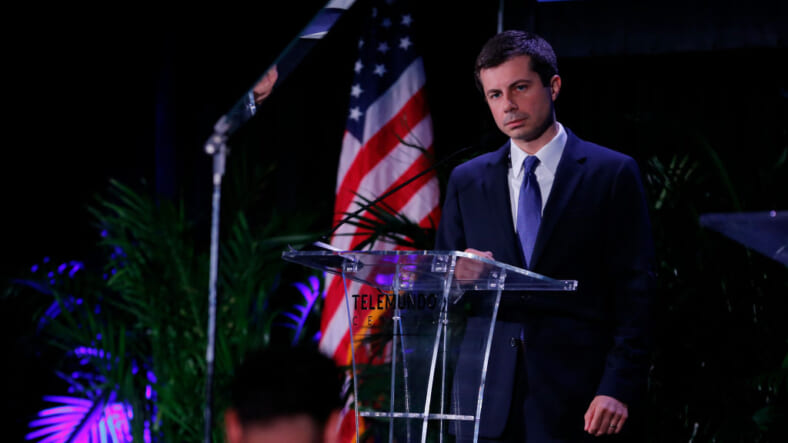 In one word, Pete Buttigieg is… UNPREPARED.

The young firebrand mayor of South Bend Indiana took the national political world by storm earlier this year with his common sense talk, his impressive military and academic record, and his ability to connect with people, particularly rural working class voters and liberals who just love the fact that “Mayor Pete” is a member of the LGBTQ community and has been married for a year to his husband, Chasten.

READ MORE: Part One: The 2020 Democrats need to stop the pandering and get on message for Black voters

However, even Achilles had a weak spot and for Mayor Pete, that’s the Black community. The 37-year old has been under fire over his handling of a case in 2012 where he fired his former Black police chief, Darryl Boykins, who was alleged to have improperly taped phone calls of senior white officers. These individuals were said to have used racist language, particularly when addressing their boss. The mayor swiftly replaced Boykins with a white man.

Boykins’ actions may have been unorthodox, but his tapes show a pattern and practice by white police officers, not just in South Bend, but similar to what is now being investigated in Philadelphia. Just last week, 72 of their officers were put on administrative leave while an internal investigation is underway regarding racist and offensive emails and social media posts.

Rather than supporting Boykins efforts at least, Buttigieg decided to fire him with no actions taken against the racist officers. Boykins sued the city and is still trying to get the tapes publicly released so everyone will know exactly what was said.

Add that to last week’s most recent racial incident in South Bend which involved the tragic shooting death of 54-year-old Eric Logan by a white police sergeant whose body cameras were conveniently turned off. Sgt. Ryan O’Neill was responding to reports of someone breaking into cars downtown when he encountered Logan, who was allegedly armed with a knife. O’Neill shot Logan to death and while his family mourns the loss of yet another Black man, they have also filed a federal lawsuit on Wednesday against the city and the officer.

In response to the shooting, Buttigieg met with local activists in front of police headquarters to try to provide answers to a number of concerns, including why O’Neill body cam was turned off and the lack of people of color on the police force. He did so ironically on the day that six new white officers were being sworn into the South Bend police department with not one person of color in site.

It was little consolation Eric Logan’s grieving mother who reportedly screamed at Buttigieg during a march in her son’s honor saying, “I’m tired of hearing your lies.”

It looks like the Midwest’s golden boy’s sincerity is being called into question and his ability to understand the impact of his decisions amidst the heavy burden of racial tension.

To his credit, Mayor Pete recently released what he calls the “Douglass Plan” (named after famed abolitionist and former slave, Fredrick Douglass, which will increase the Black community’s economic disparity by replacing racist policies that currently keeps Black people from gaining parity. He did so in response to increasing criticism on a national level that he is doing nothing to connect with Black voters in his own town let alone in critical primary states like South Carolina.

Policy positions aside, the young mayor’s response to the most recent crisis between law enforcement and the Black community in Indiana was nothing short of  tone deaf. His solution to the shooting death of Eric Logan was to ask the local prosecutor to assign an independent investigator. He has expressed confidence that the new police chief will recruit more officers of color and be completely transparent regarding the details associated with Logan’s shooting, none of which we will ever know because there is no video of the incident and the only other witness is dead. This is beyond naïve.

READ MORE: Part Two: Before you pick a Democrat to support, consider asking the hard questions

Last weekend, when asked directly what is he planning to do for Black communities throughout the country and whether or not he is for “us,” Buttigieg answered by pointing out the policy changes he wants to make. Rolling Stone reported:

“One of the most important pieces of homework for our campaign is to make sure there is no question in the minds of any minority voters, Black voters, be it in South Carolina or anywhere in the country, where I stand and what I will do.” He continued, “I need help. Out here, people are just getting to know me, and trust, in part, is a function of quantity time, and we are racing against time.”

No doubt Buttigieg’s resume is beyond impressive. He has served his county in combat, and we thank him for that, but he is woefully unprepared to lead this nation at a time when demographic changes are causing such racial divisions. He just doesn’t get it.

READ MORE: Dallas Police stand by decision to charge Black woman who was attacked in video

Black and brown people have already suffered great setbacks to civil rights and civil liberties under President Donald J. Trump. His track record on these issues for Black people, which is a core and critical voting base for any Democrat seeking the presidency, is poor at best.

Buttigieg cannot be trusted to truly advocate and pick up the mantle for us as say Sen. Elizabeth Warren or even former Vice President Joe Biden, who still has “street cred” with Black folks. The fact that he is a married, gay man does not cut it for me. Being gay does not translate into somehow understanding the plight of Black and brown people in America. Buttigieg needs to get his own house in order in South Bend, and then if he’s truly genuine, maybe in 2024 or beyond, he will have figured it out.

However, that day is not now.

Sophia A. Nelson is an award winning journalist and author of the award winning book, “Black Woman Redefined: Dispelling Myths and Discovering Fulfillment in the Age of Michelle Obama.”