“This is the same type of racist attack his father used to attack Barack Obama,” Harris' aide, Lily Adams, quipped. “It didn’t work then and it won’t work now." 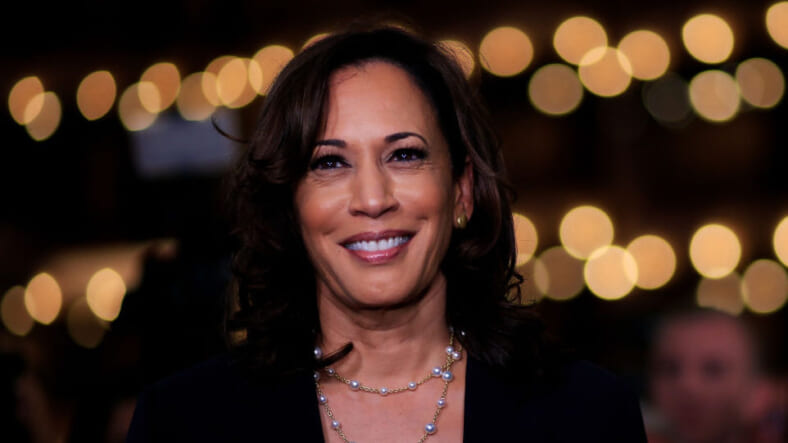 Sen. Kamala Harris‘ campaign is clapping back to trolls that say she isn’t Black enough, garnering support even from competitors in the crowded field of Democratic presidential candidates. Critics compared the “birtherism” claims to President Barack Obama‘s experience.

The tweet, written by a critic who identifies as African American, wrote: “Kamala Harris is *not* an American Black. She is half Indian and half Jamaican,” . “I’m so sick of people robbing American Blacks (like myself) of our history. It’s disgusting. Now using it for debate time at #DemDebate2? These are my people not her people. Freaking disgusting.”

Trump Jr.’s response to the tweet: “Is this true? Wow,” has since been deleted, and Donald Trump’s spokesman Andy Surabian told The New York Times it was a misunderstanding.

“Don’s tweet was simply him asking if it was true that Kamala Harris was half-Indian because it’s not something he had ever heard before,” Surabian said.”And once he saw that folks were misconstruing the intent of his tweet, he quickly deleted it.”

But Harris’ aide, Lily Adams, quickly bounced back with a response. “This is the same type of racist attack his father used to attack Barack Obama,” she said, according to CNN. “It didn’t work then and it won’t work now.”

The same forces of hatred rooted in 'birtherism' that questioned @BarackObama's American citizenship, and even his racial identity, are now being used against Senator @KamalaHarris. It’s disgusting and we have to call it out when we see it. Racism has no place in America.

The attacks against @KamalaHarris are racist and ugly. We all have an obligation to speak out and say so. And it’s within the power and obligation of tech companies to stop these vile lies dead in their tracks.

The coordinated smear campaign on Senator @KamalaHarris is racist and vile. The Trump family is peddling birtherism again and it’s incumbent on all of us to speak out against it.

These disgusting and racist attacks are part of a right-wing effort to delegitimize an accomplished and powerful black woman.

Senator Harris has lived an American dream story, and we shouldn’t give voice to those attempting to undermine it. https://t.co/tZssl0zvnf

There's a long history of black Americans being told they don't belong—and millions are kept down and shut out to this day. @KamalaHarris is an American. Period. And all of us must call out attempts to question her identity for what they are: racist. https://t.co/g3n7lmoU2h

However, the best clapback of them all came form U.S. Sen. Cory Booker.

Kamala’s “Blackness” is in question because although she was born in the U.S., she was born to an Indian mother and Jamaican father, both immigrants; her marriage to a white man; and her record of incarcerating minorities as a prosecutor.

But Harris told the Breakfast Club in March, she’s unbothered by false claims about her blackness.

“So I was born in Oakland, and raised in the United States, except for the years that I was in high school in Montreal, Canada,” Harris responded with a laugh. “And look, this is the same thing they did to Barack (Obama). This is not new to us and so I think that we know what they are trying to do.
“They are trying to do what has been happening over the last two years, which is powerful voices trying to sow hate and division, and so we need to recognize when we’re being played,” Harris said.