Ali Alexander tweeted that Harris doesn't represent U.S. Blacks because her father was born in Jamaica. 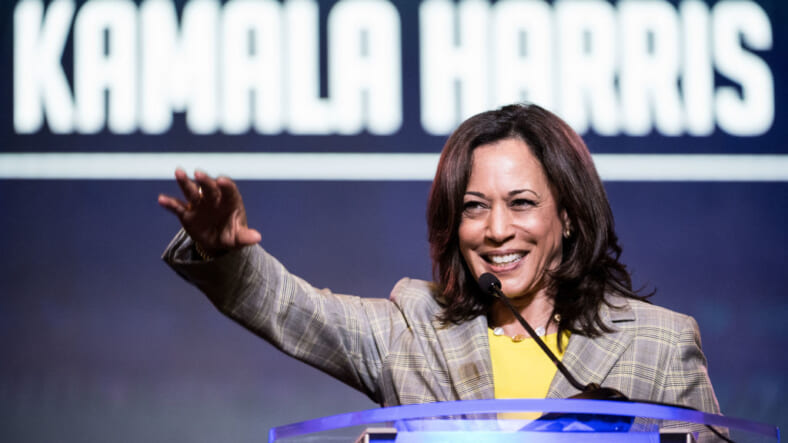 Ali Alexander tweeted that Harris doesn’t represent U.S. Blacks because her father was born in Jamaica. Although Harris was born in Oakland, Calif., she is an American of both Jamaican and Indian decent.

According to Huffington Post, the “birtherism” attack began after Donald Trump Jr. retweeted and later deleted Alexander’s tweet, saying, “Kamala Harris is *not*an American Black. She is half Indian and half Jamaican. I’m so sick of people robbing American Blacks (like myself) of our history…”

The jab at Harris appeared soon after Thursday night’s Democratic Presidential debate where Harris slammed former Vice President Joe Biden, saying he had a hand in not integrating schools in California, causing her to be bused far away for school, The Grio reported.

Alexander, a “black activist,” claims Harris is not being Black enough because she has no ancestors who suffered through slavery or during the civil rights movement.

Alexander is known to be a far-right political operative and conspiracy theorist, according to Huffington Post. Alexander has also gone by the name Ali Akbar and Abdul Razaq Akbar.

Almost immediately after posting, Akbar, using the alias Ali Alexander said his tweets “went viral.” This was due to the same tweets word for word being posted on several twitter accounts that BuzzFeed reported as “bots”.

But the damage was already done, Social media researcher Caroline Orr took screenshots of what twitter was saying about Harris’ lack of Blackness.

A lot of suspect accounts are pushing the “Kamala Harris is not Black” narrative tonight. It’s everywhere and it has all the signs of being a coordinated/artificial operation. #DemDebate2 pic.twitter.com/DTeB2qWJnm

The claims of Harris not being Black enough run parallel with the racist “birtherism” claims Donald Trump made against President Barack Obama. Both Harris and Obama have Black fathers who weren’t born in the U.S.

READ MORE: Kamala Harris pressed to get more personal about why she’s running for president

The Huffington Post reported, in an interview earlier this year Harris said, “This is the same thing they did to Barack, this is not new to us.” She added that “powerful voices” are “trying to sow hate and division among us. We need to recognize when we’re being played.”

Harris aide Lily Adams chimed in on Donald Trump Jr.’s retweet to The New York Times on Friday saying, “This is the same type of racist attack his father used to attack Barack Obama,” she said. “It didn’t work then and it won’t work now.”

And of course, supporters had a lot to say about the trumped up birther claim.

Kamala Harris is both Black and Indian. That does not make her any less Black or any less Indian.

Her parents being born somewhere else doesn’t make her any less American.

Y’all gotta read a book or something because this is exhausting. All of y’all aren’t bots.

— brittany packnett cunningham does not do remixes. (@MsPackyetti) June 29, 2019