Black Hollywood makes a big, bold statement at the world premiere of ‘The Lion King’

Blue Telusma
Celebs come out for the World Premiere of Disney’s “THE LION KING” at the Dolby Theatre on July 09, 2019 in Hollywood, California. (Photo by Getty Images for Disney)

Some of Hollywood’s biggest names got into formation Tuesday evening on the red carpet at Disney’s The Lion King world premiere at the Dolby Theatre. Everyone in the star studded cast was in attendance including Beyoncé, Donald Glover and Alfre Woodard along with other notables like Kelly Rowland, Yara Shahidi and Tiffany Haddish.

Beyoncé even used the big night as an excuse to have a mommy/daughter date with Blue Ivy Carter as the two showed up decked in complimentary crystal encrusted outfits.

Check out our gallery below to feel the love tonight and witness some of the best looks from some of our all time world premiere stunting celebs. 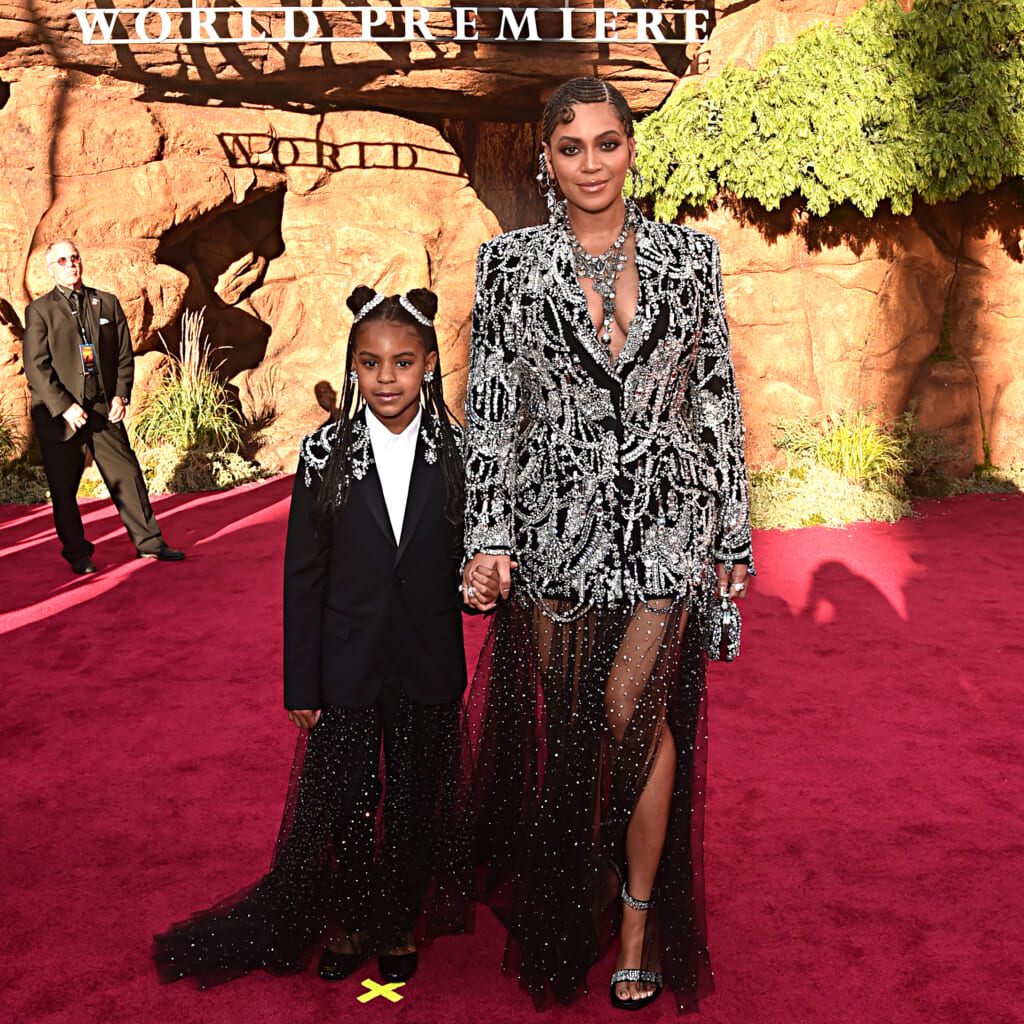 Mother and daughter were a vision in crystals. Bey, who voices the character Nala in the re-imagined movie, also executive produced a companion album The Lion King: The Gift, and dropped a new song Spirit on Tuesday night.

Sisters Chloe Bailey (L) and Halle Bailey showed up dressed in Black just like their mentor, Beyonce. Halle has been a hot topic in the last week since it was announced that she, a Black woman, would play the lead role of Ariel in the live action remake of Disney’s Little Mermaid.

Destiny’s Child alum Kelly Rowland was all smiles in a zebra print ensemble with her date for the evening, her son, Titan Jewell Weatherspoon in tow rocking a blue suit and cornrows.

Tiffany Haddish definitely got the memo about bold suits being on trend this season and let everybody at the world premier event know. She showed up in a bright red and blue Libertine two piece.

Donald Glover aka Childish Gambino, voices the role of Simba and opted for a 1970’s inspired patterned double-breasted, Gucci suit.

The youngest executive producer of any film ever made, Marsai Martin has already admitted to being a life-long member of the Beyhive. The Black-ish star looked like a Disney princess herself in a gorgeous red gown from Oscar de la Renta.

The other third of Destiny’s Child showed up to the Lion King World Premiere red carpet proud to support her bestie.

“I think she’s just excited to be in it, probably as she was when she first saw the movie,” Michelle Williams told reporters. “And to have a full circle moment to be in something that you just salivated over when you were younger, is just awesome.”

Legendary actress Alfre Woodard voices the role of Sarabi and hit the carpet in a regal gold and black gown designed by Badgley Mischka.

Grown-ish star Yara Shahidi harkened back to the vintage days of teh 1980’s power suit in this double-breasted minidress from Gucci’s fall 2019 collection.

Fresh off of her breakthrough role in earlier this year in Us, Shahadi Wright Joseph plays young Nala and wore a custom gown by Miumiu with crown full of big, bouncy natural girl curls.

Hard to believe the sweet as pie, Chiwetel Ejiofor could ever play the baddie in a film, but get ready to change all that. The British actor voices the role of Scar, the treacherous brother of Mufasa and uncle of Simba.

Confidently rocking a pink suit and a fresh cut, comedian and television host, Eric Andre provides the voice of Azizi in The Lion King.

It doesn’t get any cuter or more talented than the young Mr. JD McCrary who is the voice of young Simba in The Lion King. McCrary showed up the the World Premiere event decked out in as part of the “Balmain Army” anointed by designer, Olivier Rousteing. This bespoke suit is covered in over 70 hours of Balmain’s signature beadwork and studs.

Veteran South African actor, John Kani (with his wife Mandi Kani) may not have made it in the official cast photo (he was away at the time) even though he provides the voice of wise sage Rafiki in The Lion King, but he surely was not going to miss this amazing red carpet moment.

(Photo by Jesse Grant/Getty Images for Disney)The Currys are in the house! Ryan Curry, Ayesha Curry, Riley Curry, and Stephen Curry are decked out and ready to catch Simba, Nala and ’em at the world premiere event.