According to the bride, "It looked like America threw up all over my wedding and, I'm not sorry." 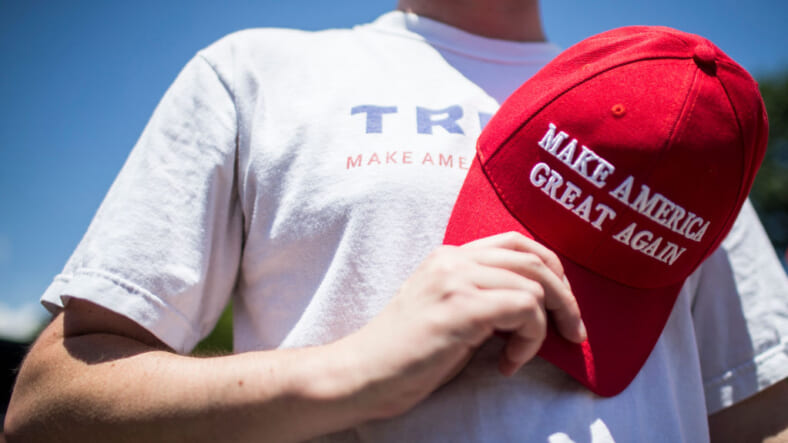 It wasn’t enough to wear a red and white “Make America Great Again” hat after or even during the ceremony for one Michigan couple tying the knot. No, they had to go no holds barred for their big day and didn’t care who was there to witness it.

Jeff and Audra Johnson decided to make Donald Trump’s campaign slogan the main focus of their wedding in Kalamazoo, Mich., with the bride sporting the words on her custom-made gown and the wedding party decked out in a patriotic red, white and blue. “Make America Great Again,” or MAGA for short, is also associated with the tenants of segregation, racism, discrimination hate and intolerance in some circles.

None of that deterred the Johnsons, who even took the nuptials a bigger step further by holding them on July 4. There were even MAGA hats for guests to wear and anti-abortion petitions for guests to sign, reports Fox 17 West Michigan.

Subtlety was never the intent of the wedding decor for Audra and Jeff Johnson’s nuptials.​ https://t.co/BQkqMXOW1T

??Michigan couple throws a MAGA-themed wedding, complete with GUNS and patriotic decor & they even had an anti-abortion heartbeat bill petition for guests to sign
❤️❤️❤️❤️❤️
Audra and Jeff Johnson got married on the Fourth of July to celebrate America
??HELL YEA ?? pic.twitter.com/k8yL0eFJZr

“It looked like America threw up all over my wedding,” said the bride. “And, I’m not sorry.”

In a wedding photo, the words “Make America Great Again” are featured in red down the front of the bride’s white gown, designed by Andre Soriano, known for designing other gowns in support of President Trump. The bridesmaids all wore blue dresses with red and white MAGA hats while the groomsmen sported red vests and MAGA hats. Audra Johnson even had her nails polished red, white and blue.

Not everyone was thrilled with the theme, however.

READ MORE: Pro-Trump singer shows up as the Mexican wall at Grammys with MAGA purse

The maid of honor is a Democrat but complied by supporting her friend who asked her to just wear a red hat for the wedding. The groom’s father on the other hand was straight up appalled by the motif, and refused to come at all.

“As long as you support that racist in the White House, I won’t be attending your wedding,” Fox 17 reported the groom’s father texted.

The bride says, in fact, that her own brother has disowned her for her strong political beliefs. No word on whether the brother attended the wedding.

Michigan was one of the key states that helped elect President Trump in 2016.