The Trump-supporting singer showed up to the Grammys for another year, wearing another message touting the president's policies 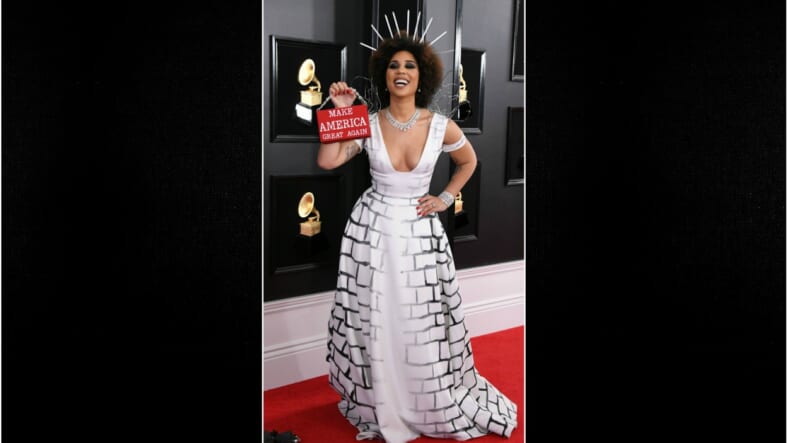 For the third year in a row, pro-Trump singer Joy Villa has made a statement on the red carpet at the 61st Grammy Awards by wearing a gown clearly meant to provoke the anger of those in attendance while pandering to her MAGA hat-wearing fanbase.

According to The Hollywood Reporter, Sunday, Villa showed up in a dress with the words “Build the wall” written on it. The ensemble designed by Desi Lee Allinger-Nelson of Desi Designs Couture was topped off with a shoulder piece that mimicked barbed wire seen on the top of security fences, and she held red handbag with the words “Make America Great Again.”

READ MORE: Student who snatched a MAGA hat from a Trump supporter could face a year in jail

While speaking to Fox News, the 27-year-old did her best to explain why she continues to troll the public on one of the music industry’s biggest nights.

“Seventy percent of the heroin in our nation is brought in through Mexico,” Villa said. “This is not personal against this country or the people. It’s not about race. It’s about protecting the people who are in this country.”

“I’m Latina, I’m black. I support what the president says about building the wall, so that’s what this dress represents.”

When speaking to The Hollywood Reporter, Villa said wearing controversial costumes at high-profile events provide her an “opportunity to show the world who I am.”

“I approach it as a show,” she added. “I want to ‘wow’ people. My heroes on the red carpet have always been Cher, Madonna, the wild ones; the worst dressed. Or Lady Gaga with the meat dress. Who even talks about the best dressed? No one even remembers who was best-dressed last year”

READ MORE: Brace up! Another government shutdown looms as Trump pushes for wall

I don’t care what anyone thinks. I 100% support the wall & our President @realDonaldTrump. Do you want more drugs brought in? (70% of heroin from Mexico) More illegal women getting sexually assaulted (1 in 3)? More children being trafficked? (Thousands a year) because I DO NOT! pic.twitter.com/ErdOJhD5IN

In 2018, the singer showed up to the 60th Grammy Awards in a white gown with a hand painted fetus-in-utero on the skirt while clutching a bag which said “Choose life.” And the year before that, less than a month after the painful 2017 inauguration, she wore a blue “Make America Great Again” outfit, which was designed by Filipino immigrant Andre Soriano.

Although Villa has been nothing if not consistent in her support of the president and his policies, some were surprised to see her still wearing outfits in his honor considering in December of of 2017 she accused Trump’s former campaign manager Corey Lewandowski of sexual misconduct.

Villa claims she was introduced to Lewandowski at a holiday party at the Trump International Hotel, and after the pair posed for a photo together she says Lewandowski slapped her on the butt.

“I’m wearing this silver suit and stretchy pants, and after the photo, he smacks my a** really hard,” Villa told Politico. “It was completely demeaning and shocking.”

She said she informed him “half-joking” that she could report him for sexual harassment.

While she argues that her unwavering support for MAGA is based on politics, some have speculated that these red carpet looks are more about her remaining relevant and pushing her brand as a singer. To that point, after she wore her initial “Make America Great Again’ dress in 2017, Villa did enjoy a noticeable bump in her music sales for her EP “I Make the Static” topping Amazon’s digital albums and hitting number seven on iTunes’ top albums chart.

?? #Grammys2019 TODAY! ?My now iconic 2017 @recordingacademy Grammys look supporting @realdonaldtrump & not giving a f$&k. ?????We MUST #BUILDTHEWALL Our President has done more for Blacks & Latinos then Obama ever did. This is not about color, it’s about patriotism. #USA pic.twitter.com/7yDZAm1kuk