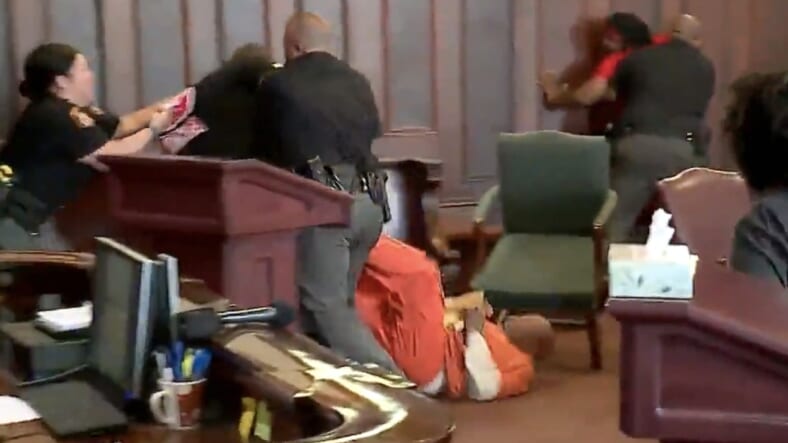 Courtroom officers in Youngstown, Ohio try to subdue two young men at the sentencing hearing of the man who was convicted of killing their mother. (WKBN)

Tensions fueled by the grief of a family overflowed into a brawl in a Youngstown, Ohio courtroom when two men leaped and attacked the man convicted of murdering their mother.

Dale Williams, 62, was in the middle of being sentenced in a Mahoning County courtroom for the brutal killing of a 46-year-old mother, Elizabeth Pledger-Stewart, when the children of the victim took matters into their own hands and lunged for him. Things quickly escalated and mayhem ensued in the courtroom as authorities tried to get the situation under control.

One of the men was able to grab hold of Williams feet and pull him off a seat in the scuffle, while his brother jumped into the fray, hitting Williams and was eventually tased by deputies, in video shown on local station WKBN.

“You killed my mother, man,” one of the men said as authorities put him in handcuffs.

Both men were arrested.

Pledger-Stewart’s family was just about to make a victim impact statement in court, which is heard by the judge before he renders a decision about how much time should be given to the convicted man.

The sentencing was subsequently postponed and the killer was taken to a local hospital.

“Our deputies there intervened. We had extra officers in the courtroom to begin with,” Mahoning County Sheriff Jerry Greene said Thursday. “I’m sure they knew that there were some tensions with this sentencing hearing. From everything I can see, the officers acted appropriately. In fact, did a pretty good job, in my opinion.”

Williams was charged with the killing after witnesses said he pursued Pledger-Stewart in June 2017, and ran her off the road and crashed into the back of her vehicle. He then shot her repeatedly and unloaded his weapon into her when got out of her car, according to reports.

Williams surrendered to police as they pulled up on the crime scene. Just a day before Pledger-Stewart reportedly filed a report with the Boardman Police Department claiming that Williams threatened her.

Williams pleaded guilty in May to aggravated murder for the 2017 killing, according to WKBN. He is facing 23 years to life in prison.