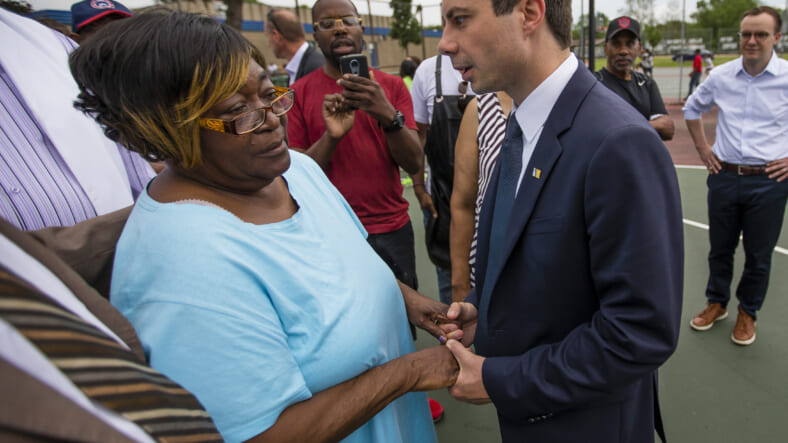 The officer at the center of a killing of a Black man in South Bend, Indiana has resigned following calls for him to step down by community activists and the family of the victim.

Eric Logan was shot and killed June 16 when Sgt. Ryan O’Neill fired his weapon while  following up on a report of car break-ins in.

The community erupted in outrage which also caused Democratic presidential candidate Pete Buttigieg, the city’s mayor to meet with residents in an attempt to ease tensions about the handling of the case.

Harvey Mills, the president of the Fraternal Order of Police confirmed that O’Neill stepped down saying the officer “did his job and was forced to defend his own life from a convicted felon who was armed with an eight-inch hunting knife,” The NY Post reports.

Earlier this month, Logan’s family demanded that Buttigeig make a recommendation to get Logan’s pay revoked during the investigation. Buttigeig said he didn’t have that authority.

“It’s a board of safety. It’s five civilians appointed by the mayor, who meet and receive evidence and in a transparent and accountable process, decide on matters like this,” he said. “I know that some people imagine that a mayor sits up there in the office and decides who’s in trouble, who’s fired, who goes up and who goes down.”

The fatal shooting has become a political headache for Buttigieg in the midst of his presidential campaign, even though he has tried to address it on the local level.

The officer previously defended shooting Logan saying he confronted him in a parking lot and only shot him after he threatened him with a knife. But this remains unconfirmed because O’Neill did not have his body camera on at the time of the incident.

The family of Eric Logan has since filed a civil rights lawsuit.