Lil Kim says new album ‘9’ is a spiritual awakening: ‘That number is very powerful for me’

She promises to still bring "Gangsta Kim" though 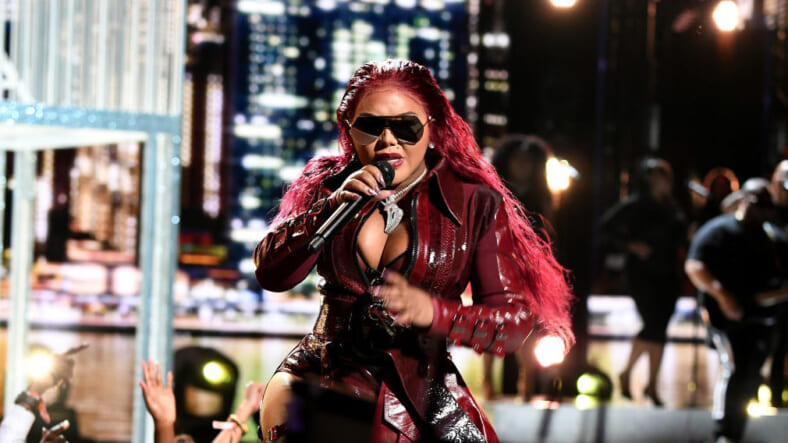 Lil Kim recently shared the sentimental meaning behind the name of her upcoming album. After killing her verse on Mary J. Blige’s “I Can’t Love You” at the Essence Fest main stage earlier this month, the Queen Bee answered a few questions from the media about what she has in store for her fans and how she’s continuing Biggie’s legacy.

This past spring, Lil Kim reunited with her Junior M.A.F.I.A. fam and others on May 21st, what would have been the Notorious B.I.G.’s 47th birthday. The Brooklyn rapper was shot dead in Los Angeles after a Soul Train Awards ceremony. His killer has never been apprehended. Since Biggie’s death, the members of the rap collective he mentored have broken ties with one another. Before the birthday dinner, many had not communicated in years.

“It was the best way to bring the family back together and use that to take back the legacy because some people have tried to take that away from Biggie and us as family. Make sure that his mom and his kids are always remembered, he’s always remembered and use that as a foundation to change the narrative” said Lil Kim when asked about the reunion/celebration.

“D-Roc one of his best friends and now family, came up with a slogan I love. Biggie’s first album was Ready to Die.  D-Roc said at the next annual dinner we’re gonna do a slogan called Ready to Live. We’re changing the narrative,” she continued. We’re  keeping his legacy alive and doing positive things through his name. I think he would want it that way.”

While Lil Kim is making sure Biggie isn’t forgotten, she’s also keeping up with her own evolution as an artist and letting people know the special meaning behind her next album’s name.

“The name of my album is 9.  I feel like I have to elevate as an artist. It’s for me and it’s also for my fans. I got things on there for them that I know they’re going to want to hear. I got to give them what I started off with because I can never abandon that. But at the end of the day, I have to show elevation, 9 is a spiritual awakening moment for me,” explained the Grammy Award winning rapper.

“My baby was born June 9th. My baby can be the sweetest baby and then ‘Uh oh, there goes the Gemini.’ Biggie passed away on March 9 and then it’s 2019. And there were nine members in Junior M.A.F.I.A., that’s how it started. So, that number is very powerful for me,” she said. “In this album, you’re gonna feel my spiritual growth.  It’s still gonna be me though. I still have to give you the sexy, raunchy, fly, gangsta Kim.”

Beyond the music, Lil Kim also has a touch of the designing bug. Known for her flashy, over-the-top style choices, the Brooklyn MC revealed that she’s going to be rolling out a fashion collection.

“I’m working on a clothing line. I’m getting into doing what I love and I’m styling myself. What I have on now, I styled myself. I feel like this is the season to do it all. If I wasn’t Lil Kim the rapper, I’d be Lil Kim the designer or Lil Kim the architect. I love home design too. I watch HGTV all day,” she confessed.

Lil Kim also has a new show called Girls Cruise, co-starring singer Mya and TLC’s Chilli. Head to VH1 to check out the premiere episode that debuted this week.