The traditions of brass bands playing the French Quarter clashed with a local businessman who called police when one blocked his entrance, but resulted in a violent confrontation 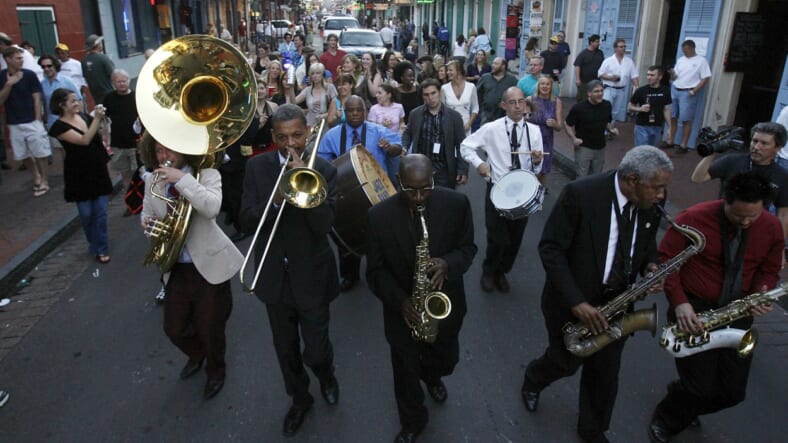 Members of the Preservation Hall Jazz Band lead a second line parade down Bourbon Street during the grand re-opening of Preservation Hall on April 27, 2006 in New Orleans. Eugene Grant, who plays in a similar band was involved in an altercation with New Orleans police over blocking the entrance to a bookstore. (Photo by Chris Graythen/Getty Images)

A white book store owner has had to temporarily shut his business down after an incident in which he called police on a popular Black brass band musician playing music on a busy street in New Orleans.

A video of the arrest, which has gone viral shows Eugene Grant, 27, a local musician who was held down by a New Orleans police officer on claims that he hit the cop after his band was confronted for blocking the entrance to local bookstore, Frenchmen Art & Books, USA Today reports.

Officers reportedly arrived on the scene Monday night and asked the band to move to the sidewalk because they were blocking traffic and access to the entrance of the store.

Grant, a trumpet player, was arrested “for obstructing public passages and resisting an officer,” according to an NOPD spokesman.

“It’s hard for me to believe that he was in any way aggressive. That being said, he also has special needs,” Cherrell Simms Taplin, Grant’s lawyer told USA TODAY.

The charges against Grant were dropped.

“There’s a possibility that there was some lapse in communication between Eugene and the police officers.”

“Of course he is disheartened by what happened because he has been playing music on that corner for at least 10 or more years,” Taplain said. “But it hasn’t stopped him; he’s still determined to continue to play music on the streets of New Orleans.”

Part of the culture of New Orleans is visiting the electric French Quarter which usually is buzzing in the heart of the city with band members blasting music as throngs of people follow along and strut down its famous streets.  So Grant’s arrest has outraged the local community so much that the store’s Yelp page was disabled because it was flooded with negative comments.

Zalkind, who is white, told the Washington Post that he opted to close the store Tuesday and Wednesday because his shop is facing a tremendous amount of backlash. He said he called the cops because of ongoing frustration with the bands he said he has asked for weeks to stop blocking entrance to his shop.

“If I knew that Little Eugene was going to be tackled, I wouldn’t have made that phone call,” he told the Post.