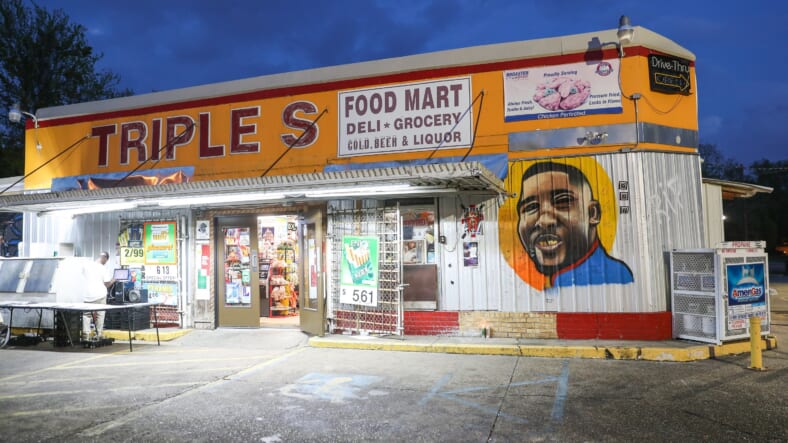 A mural in memory of Alton Sterling is displayed on the wall outside of Triple S Food Mart Baton Rouge, Louisiana. (Photo by Josh Brasted/Getty Images)

For Baton Rouge Police Chief Murphy Paul, hindsight is 20/20, and he reportedly regrets the hiring of officer Blane Salamoni, who shot and killed Alton Sterling in 2016.

—In the case of Alton Sterling’s death, one officer fired and one officer suspended for three days—

“Baton Rouge, we are sorry,” Paul said during a press conference, WAFB-TV reports.

“I want to apologize to the family of Alton Sterling and his family because [Salamoni] never should have been hired. Although we obviously cannot change the past, it is clear we need to change the future.”

Sterling was shot six times outside of a Louisiana convenience store by Baton Rouge police officers as he was attempting to sell music CDs.  Cellphone video footage of the encounter went viral.

The officers on the scene tased Sterling, wrestled him to the ground, and then shot him.

As part of Salamoni’s settlement deal he was allowed to resign instead of being fired, after he was terminated from the force in March 2018, Paul said. He will not receive any financial compensation and all his subsequent claims are dismissed, his attorney Leo Hamilton, told the outlet.

Salamoni was also not honest when he applied for a job with the Baton Rouge Police Department and did not reveal that he had previously been arrested for a domestic incident.

Salamoni had also often used unnecessary force before and had issues and skirmishes with other officers.