Patti Davis said her father had taught her racist language was "toxic" and was not allowed in their home. So she made no excuses for what was recorded on a 1971 tape with Richard Nixon 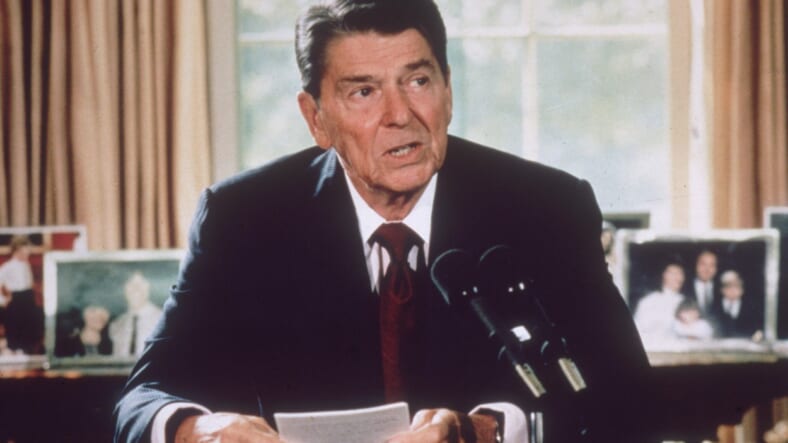 American president Ronald Reagan makes an announcement from his desk at the White House, Washington DC. in 1985. (Photo by Hulton Archive/Getty Images)

The daughter of late President Ronald Reagan is asking for the public’s forgiveness for recently unearthed audio in which her father calls African diplomats “monkeys.”

In an opinion piece published in The Washington Post, Patti Davis also denounces the remarks that Reagan made by her father in a telephone call with late President Richard Nixon as inexcusable.

“There is no defense, no rationalization, no suitable explanation for what my father said on that taped phone conversation,” Patti Davis wrote in the piece.

Davis asked for forgiveness on her father’s behalf, and called the words and “aberration.”

“The words he used in his conversation with Nixon cannot be interpreted as anything but ugliness,” she wrote. “That’s what makes this so painful.”

The recording released publicly on Tuesday by the National Archives dates back to October 1971, when Reagan was governor of California and Nixon was president. In it, Reagan refers to a group of United Nations delegates from African countries as “monkeys.”

The delegates voted against United States wishes to have the U.N. recognize the People’s Republic of China.

“To see those, those monkeys from those African countries — damn them, they’re still uncomfortable wearing shoes,” Reagan says in the tape.

In response, Nixon lets out a big laugh.

READ MORE: A history of racism is woven into the US presidency

Davis wrote that if she had not heard the tape for herself, she would have assumed the story was made up.

“I never heard anything like that from him,” she wrote. “In fact, when I was growing up, bigotry and racism were addressed in my family by making it clear that these were toxic and sinister beliefs that should always be called out and shunned.”

Some might beg to differ with Davis, however, whose father pushed forth policies that hurt Black Americans and who stereotyped women on public assistance as “welfare queens” unwilling to work and happy to take benefits from the government.

President Trump, under fire now for suggesting four congresswomen of color go back to there they came from, has frequently referred to Reagan, who was in the Oval Office from 1981-1989 in a heroic context. He is widely regarded in the same way by many Republicans and conservatives.