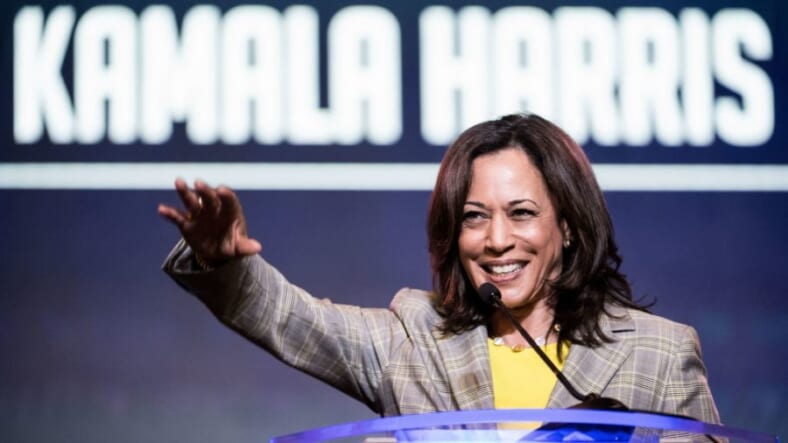 A criminal justice forum slated Kamala Harris and nine other Democratic presidential candidates to speak, but Harris on Friday threatened to boycott the event after learning that the sponsor gave Trump an award. (Photo by Sean Rayford/Getty Images)

Presidential contender Kamala Harris is happily married now but has an old beau who used to have a hit TV show.

Harris, who is married to Douglas Emhoff, is reported to have dated Emmy-winning talk show host Montel Williams, AOL reports.

The two reportedly hooked up nearly two decades ago and were arm-in-arm on the red carpet back in 2001 at the 8th Annual Race to Erase MS Gala in Los Angeles.

One time, Jet inaccurately reported that Harris was the mother of Williams’ daughter Ashley.

“Harris was also identified as the mother of Ashley in Jet, forcing the magazine to print a retraction and point out that Ashley’s mother was actually Williams’ first wife Rochelle.”

Harris is quite a catch. We wonder how Williams is feeling now knowing now he had a shot at becoming the First Man of the White House.

Harris is the only Black woman candidate and has the heavy burden of being both a woman and a woman of color. But she has taken her place on the debate stage made it clear that she isn’t afraid to hold people accountable.

In fact, during a heated moment during the first debate when fellow candidates found themselves engaging in the usual debate banter, Harris took charge. She became both the moderator and mediator of the situation.

With her hands firmly raised, she said:

“Hey guys, you know what? America does not want to witness a food fight. They wanna know how we’re going to put food on their tables.”

It’s been an ugly week dealing with the remnants of twin shootings from last weekend. Gun control, in fact, is a top issue that Harris said she’ll tackle within the first months in office.

“I will give the United States Congress 100 days to pull their act together, bring all these ideas together, and put a bill on my desk for signature. And if they do not, I will take executive action, and I will put in place the most comprehensive background check policy we’ve had. I will require the ATF to take the licenses of gun dealers who violate the law, and I will ban, by executive order, the importation of assault weapons.”