The film that's based on a true story hits theaters August 9. 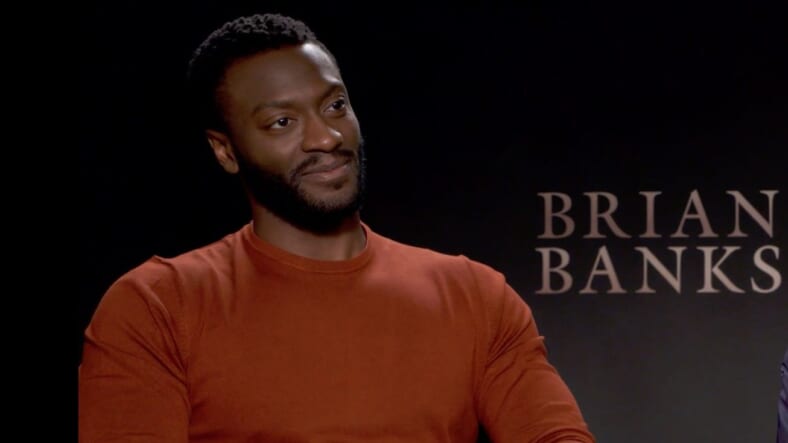 Brian Banks opens nationwide today and in it. Aldis Hodge transforms into the man who was incarcerated at 16 for a rape he never committed.

The film that tells the true story of the football player who was destined for greatness before being wrongfully convicted of raping one of his classmates also stars Greg Kinnear, Sherri Shepherd, and Melanie Liburd.

The inspirational true story of Brian Banks (Aldis Hodge), an All-American high school football star committed to USC who finds his life upended when he is wrongly convicted of a crime he didn’t commit. Despite lack of evidence, Banks is railroaded through a broken justice system and sentenced to a decade of prison and probation. Years later, with the support of Justin Brooks (Greg Kinnear) and the California Innocence Project, Banksfights to reclaim his life and fulfill his dreams of playing in the NFL.

theGrio sat down with the cast of the inspiring film directed by Tom Shadyac to find out how they tackled the true story of heartbreak, faith, and perseverance.

According to Aldis Hodge, who trained tirelessly to look more like the real-life Brian Banks, revealed that he worked to capture Banks’ undeniable light.

“I think the most pressure I had was really trying to get Brian’s light and his spirit as accurate as possible when it came to people seeing who this man was. I’m like ‘This is your life…your legacy. I want people to understand the truth of who you are the way that I see you.’ You know he’s all light and positivity and he’s truly survived and thrived from where he once started and prison. So I think that that was the biggest obstacle to really overcome was making sure that people saw who he was as a man and as a human being and not as he was attached to a situation,” explains Hodge.

The actor also highlighted how important it was that Banks’ accuser wasn’t portrayed as the story’s villain.

“I’ve asked Brian how does he feel about the woman who accused him and he said ‘I wish no ill will towards her. You know I want her to just go on you know live a good life. I’ve dealt with my anger. It’s in the past and it is back there in prison.’ So he’s moved on. The real villain is the judicial system the people that were in position to actually do their jobs did not do their jobs.”

Check out the full interview with Aldis Hodge and Greg Kinnear above.