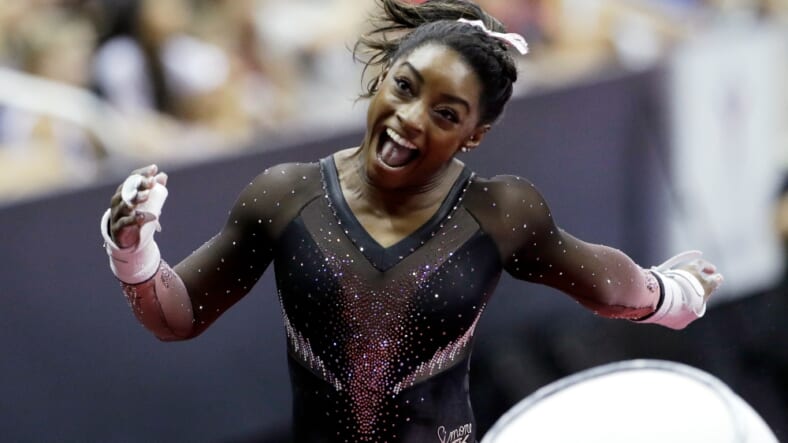 Simone Biles celebrates after competing in the uneven bars to win the all around senior women's competition at the 2019 U.S. Gymnastics Championships Sunday, Aug. 11, 2019, in Kansas City, Mo. (AP Photo/Charlie Riedel)

Simone Biles tumbled and flipped her way to a 6th national championship by leaving her mark with out-of-this-world moves that helped gymnast make history.

—Simone Biles criticizes USA Gymnastics for failing to protect its athletes from sex abuse “You had one job!”—

From Friday to Sunday, Biles broke records and broke the internet when she made history three times and became the first female gymnast to land two new moves in competition during the U.S. women’s gymnastics championships.

Biles wowed double-double dismount (a double twist and double somersault) on the balance beam, making her the first person in the history of the sport to perform such a move on Friday, WSBTV reports.

And on Sunday, she made history again when she landed the triple-twist, double-flip move in her first pass on floor

“It’s like she hit a hole in one and we were all there,” USA Gymnastics high performance director Tom Forster said. “It’s a big deal and we all know it. No one in the world has done it before in the women and actually, she does it better than most of the men who have done it. She should be super excited about that.”

RESPECT THAT, BOW DOWN ? @Simone_Biles keeps making history! First woman to land a triple double in competition on floor ?

Biles also made history by tying Clara Schroth Lomady for the most national titles, which was set in the 1950s.

“I’m really happy with the beam dismount and how it’s come along, because if you had asked me after [U.S. Classic] if I was going to complete it, I would’ve said no,” Biles said at the competition about the balance beam move. “I feel like in those short two weeks we did a lot of work on a couple of the events, so I’m pretty excited with how it turned out.”