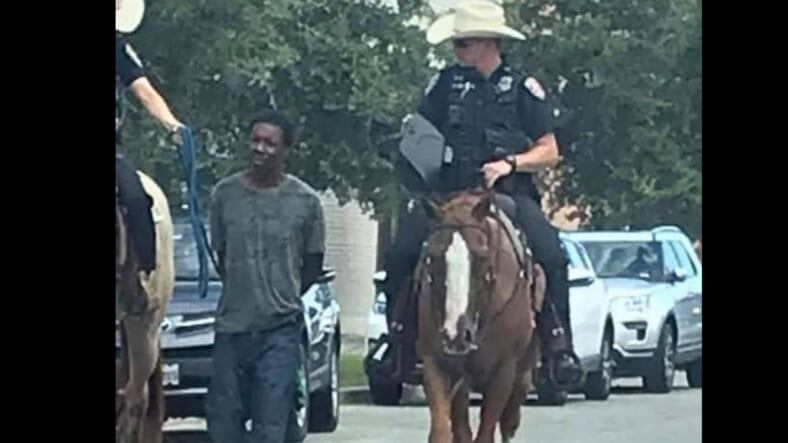 The Galveston Police Department issued an apology on Monday after this image was circulated on social media showing two white mounted police officers leading Donald Neely, a handcuffed Black man behind their horses, attached by a rope or leash of some kind. (Facebook)

Police in Galveston, Texas are being asked to turn over body camera video of their arrest of a Black man who was bound with rope and led down the street by two officers on horseback.

Donald Neely, 43, was seen in the disturbing photo that went viral showing his Aug. 3 arrest on charges of criminal trespassing by Galveston police officers, P. Brosch and A. Smith, according to ABC News. There is no indication that the Galveston district attorney is planning to pursue any charges against Neely, but his family now wants answers, according to Neely’s attorney, Melissa Morris.

Benjamin Crump, Neely’s civil rights attorney, said the viral image sparked outrage in the Black community because it was reminiscent of how slaves were treated. Crump said seeing that image was as if “they were dragging our entire community down the street by rope.”

“These horrific images…conjure up historical memories of when slave owners…dragged Black slaves by rope around their necks back in the 1700s and the 1800s,” Crump said, according to ABC News. “This isn’t 1819, this is 2019, Galveston!”

“If these officers are good people, of good character, then the Galveston Police Department should have no problem releasing the police body cam video,” Crump said. “(The video will show) the content of their character when they talked to, and how they treated an unarmed Black citizen who was suffering from mental illnesses.”

Neely has been diagnosed with paranoid schizophrenia, depression and bipolar disorder, according to Crump.

READ MORE: Galveston activist demands the firing of two police officers who led a Black man on a leash

“The way the officers treated him, it just ain’t right… They dehumanized my brother on the streets,” said Andy Neely. “Why would they do that after several encounters with him? It was just to humiliate him. No man, no women, black, brown, purple, should be embarrassed the way my brother was.”

Neely’s family are also calling for the release of the bodycam video. In a statement, Galveston Police said it would release the footage following the investigation.

“The Texas Occupations Code…prohibits the release of the videos before that time,” the statement read.

In the interim, Crump is galvanizing support for Neely around this issue and along with his family and legal team, they are organizing a march in Galveston if the police don’t release the body cam video. They’ve already received support from Texas Rep. Sheila Jackson Lee who has also requested the police release the video.