Corinne Foxx and Sistine Stallone are paving their own path in Hollywood. 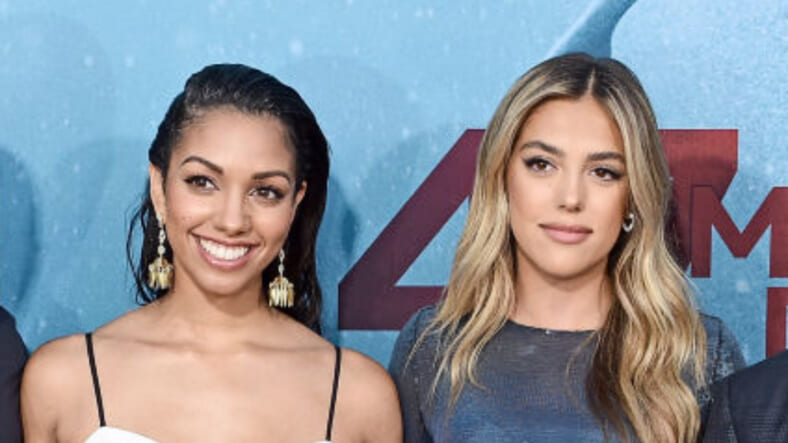 Corinne Foxx and Sistine Stallone are sisters of a different kind.

While visiting theGrio‘s New York City studios, the young actresses both don high ponytails, sport stylish outfits, and share laughs about having the same college (University of Southern California) as their top choice.

Besides both young women being the daughters of two of Hollywood’s biggest stars, the pair are also starring together in the highly-anticipated summer thriller, ’47 Meters Down: Uncaged,’ which follows four girlfriends (including actresses Brianne Tju and Sophie Nélisse), as a tour deep-sea diving in underwater caves goes completely wrong.

Both Foxx, 25, and Stallone, 21, are the daughters of famous actors, Jamie Foxx and Sylvester Stallone respectively, which means this isn’t their first rodeo when it comes to being on a movie set.

Stallone, on the other hand, is taking a bit of a different approach.

“I actually don’t like to go to him for acting advice because I personally think he overacts,” she said with a sly smile, then laugh.

“In terms of treating people on set with utmost respect, I’ve always seen him do that. So, that’s something I definitely wanted to carry with me when I was working on set.”

READ MORE: WATCH: The cast of ’47 Meters Down: Uncaged’ explains why this is the type of thriller you don’t want to miss

Both young women also insist their dads emphasized a humble upbringing, encouraging them to get a formal education rather that just coasting on their Hollywood perks.

Foxx has already earned her bachelors degree in public relations from USC and has worked as a D.J. and model, and joined her dad spinning on the FOX hit show, Beat Shazam. Meanwhile Stallone is currently finishing up as student at USC, boasts an Instagram following of over 1 million fans, and aspires to become an executive producer.

“The only time that we were really in the public eye was when we were doing a red carpet for one of my dad’s events or premieres,” said Stallone. “They did a really great job of kind of sheltering us away and waiting until we got an education and waiting until we were mature enough to kind of explore the world.”

“I feel the same way,” said Foxx. “I do not feel like I grew up in Hollywood. Yeah, I mean, I went to the Oscars, but I was 10-years old and I didn’t really know what it was. Then you go home and it’s like [do your] chores. So, my parents did a good job being like, ‘This is a really special thing you get to do, but there’s real life too.'”

“47 Meters Down: Uncaged” is in theaters nationwide on Friday.

Watch the full interview above to hear the ladies dish on how starring in “47 Meters Down” pushed them artistically and athletically, and where their Hollywood ambitions will take them next.