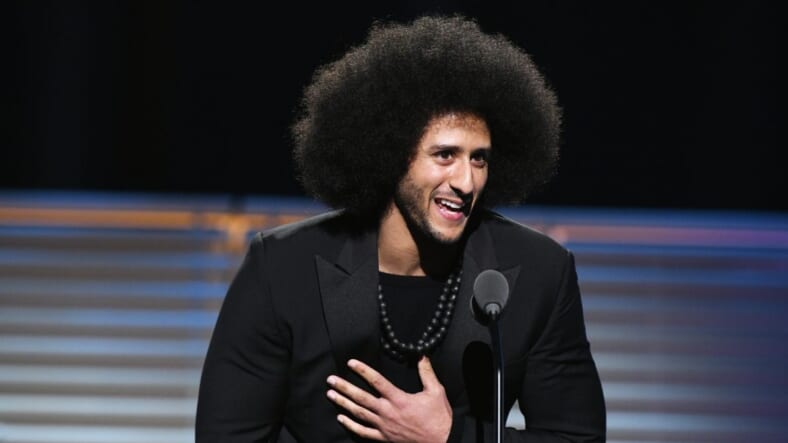 On Wednesday, Colin Kaepernick took to social media to mark the three-year-anniversary of the day he took a stand and kneeled in his first pre-game protest of racial injustice and police brutality.

The Super Bowl winning quarterback’s post just happens to coincide with Jay-z‘s controversial announcement of a new NFL partnership and that has some questioning the timing.

The protest by the former San Francisco 49ers QB, which began August 14, 2016 when he took a knee during a preseason game against the Houston Texans, was designed to highlight the social injustices experienced by African Americans around the country at the hands of police.

Today marks the three year anniversary of the first time I protested systemic oppression. I continue to work and stand with the people in our fight for liberation, despite those who are trying to erase the movement! The movement has always lived with the people! ✊?

“Today marks the three-year anniversary of the first time I protested systemic oppression,” Kaepernick tweeted. “I continue to work and stand with the people in our fight for liberation, despite those who are trying to erase the movement! The movement has always lived with the people!”

Kaepernick dropped a moving video with montages of 12-year-old Tamir Rice who was killed by a trigger-happy Ohio cop within seconds of approaching him in a park as well as other police shootings from around the country.

He also reminded the masses he’s been “Denied work for 889 days” which flashed across the screen of his video.

As Kaepernick continues to press on with his message of fighting for social injustice, Jay-Z who has been a big supporter of Kaep, signed a deal with the NFL to co-produce the Super Bowl Halftime show and also contribute to Inspire Change, a foundation the NFL started in response to public outrage over their mishandling of Kaepernick’s peaceful #TakeTheKnee protest.

“For me it was about action. What are we gonna’ do with it? … everybody knows I agree with what you’re saying [in Kaepernick’s underlying message]. So what are we gonna do? … [Help] millions and millions of people, or we get stuck on Colin not having a job,” Jay said.

Carolina Panther Eric Reid took to social media to slam Jay for siding with the NFL saying he believes it was all about money and buries Kapernick’s career.

“These aren’t mutually exclusive,” Reid wrote back … “They can both happen at the same time! It looks like your goal was to make millions and millions of dollars by assisting the NFL in burying Colin’s career.”