Dealing with the mass shooting in his hometown, the 2020 presidential candidate is detailing a plan to combat the extremism that he has has been fostered by President Trump's rhetoric 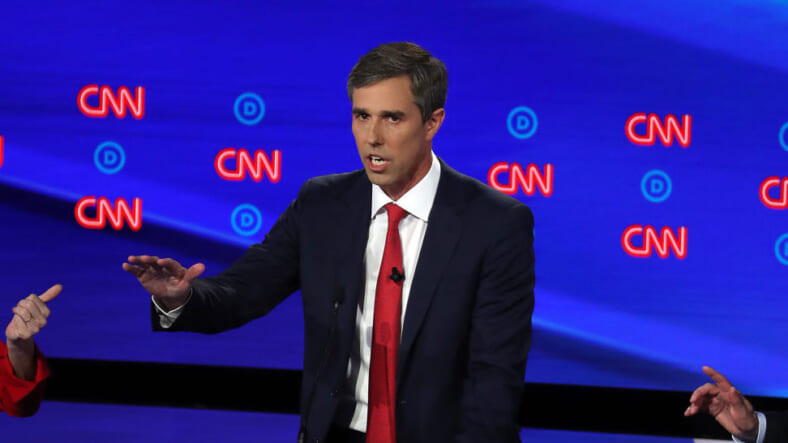 Former Texas Democratic Representative, Beto O’Rourke, is taking a stand against nationwide hate, and is issuing a call to action for gun reform, as detailed in his latest plan to combat both.

In a statement sent by his campaign to theGrio, the to 2020 Democratic presidential canddiate detailed his plans, citing the recent domestic terrorist attack in El Paso, his hometown, in which 22 victims were fatally injured by a violently racist gunman who was targeting Mexican immigrants.

“The terrorist attack on El Paso, fueled by the racist rhetoric of Donald Trump, was not only an attack on America, but an attack on the aspirational ideals of this nation,” O’Rourke said. “Congress’ failure to act has resulted in a democracy that is unwilling to confront an epidemic of gun violence. It’s time for those in positions of public trust to stand up, tell the truth and offer bold solutions without fear of political ramifications so we can finally start making progress and saving lives.”

The El Paso shooting has been cited as the deadliest attack on the Hispanic community in American history.

O’Rourke also goes on to call on lawmakers for the crackdown of domestic terrorism, a nationwide gun buyback program and the establishment of gun licensing. The politician also asked Americans to recognize the connection between hate speeches by given by Donald Trump and conservative media as well as the negative influence and impact of online radicalization by way of social media and certain leniency.

His plan to end the culture of hate and violence in America includes the following priorities:

“America is the only country in the world with more guns than people. Every single day, shootings tear our families and communities apart. And every year, we lose nearly 40,000 people to gun violence,” O’Rourke said. “This isn’t normal. And it doesn’t have to be this way. But it will not change unless we face what’s behind this epidemic of gun violence – and connect the dots between hatred, racism and white supremacy, and the manifestation of that hatred through violence.”

Patrick Crusius, the shooter in the August 4 Walmart massacre, which also injured 25 others, is being held without bond, segregated from other inmates at the El Paso County jail and is facing capital murder charges. No court dates have been set for him yet.

O’Rourke added in his statement a pointed criticism at President Trump, blaming him for a heightened racial climate in the country. He contends that since the launch of his presidential campaign in 2015, Trump has publicly “espoused racist, white supremacist and degrading attacks against people of color, entire faith communities and LGBTQ Americans.” As a result, that hatred has manifested itself in violence across the country. Further, over the past three years, Trump-supported rallies saw hate crimes rise by more than 200%.

Additional pieces to O’Rourke’s plan includes enlisting the federal government to combat white supremacy movements; getting the FBI and the Justice Department to place a priority on right wing violence; identify white nationalism as a threat and launch dedicated domestic terrorism offices with nationwide law enforcement agencies; and making internet companies accountable for the amplification of hate rhetoric online.

“We must connect these dots. And we must not let these moments define us. Instead, what will define America from El Paso, Texas to Baltimore, Maryland to Chicago, Illinois is the resilience and radical hope that communities have shown in response to these tragedies,” O’Rourke said.