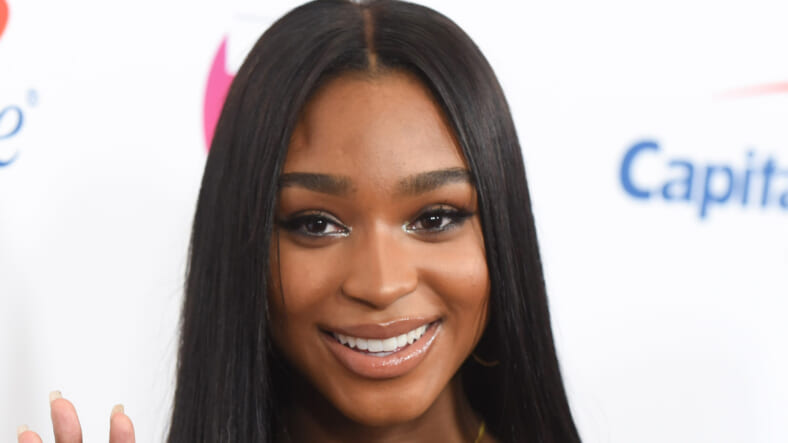 Former Fifth Harmony band member Normani‘s solo career just got a huge boost this week after the video for her new single Motivation had both fans and fellow celebs losing their minds with adulation.

In a recent interview with Rolling Stone, the singer revealed that Ariana Grande actually co-wrote the catchy radio friendly track. And the clip very cleverly pulls on the heart strings of 90’s babies by paying tribute to a slew of artists from the early 2000s, including high profile faves like Beyoncé, Britney Spears and Jennifer Lopez, just to name a few.

“I’m a break you off, let me be your motivation/To stay and give it tonight/And, baby, turn around, let me give you innovation,” she sings over the bouncy, horn-tipped melody that is a clear homage to Bey’s earlier music.

“it’s almost six am where i am rn and my cheeks hurt from smiling, refreshing, watching a million times. enjoy this special moment. my heart is so full for u !!!!!!” Grande wrote in celebration of her friends triumphant execution.

“Dope! Get it mama,” chimed in singer Ciara whose career took off around the exact time the video alludes to.

“I recorded this song a while back,” the 23-year-old told Rolling Stone during Lollapalooza weekend. “And it’s crazy because, I’ll be on Twitter, and [fans] will be like, ‘Sis, where’s the new music? Where’s the new music? I’m like, ‘Guys, it’s coming. I promise it’s coming.’ I shot the video probably a month ago. It’s going to be worth the wait…It’s an upbeat [song]. It’s a feel good record. I think that everybody will really love it. It was the first opportunity that I had to have fun.”

Is the video worth all the hype? Check it out above and decide for yourself. And below we’ve included just a smattering of all the love the singer has been getting over the last 24 hours.

READ MORE: Jay-Z was so happy he cried when his mom revealed she’s gay

So thankful for this video. Major shout out to the talented @Normani for the INCLUSIVITY and REPRESENTATION. Dark skin girls, fat girls, DOUBLE CHIN and all! She is our superstar. Take over the world Queen! ?????? pic.twitter.com/fLgbjfgo67

Normani and Lori Harvey on the set of the “Motivation” music video pic.twitter.com/xs56bx9uEG

.@IamCardiB continues to support @Normani, this time by posting a clip of the #Motivation music video on her account. ? pic.twitter.com/QueRl1JfBY

Normani. A queen who understands the importance of visibility and representation. ? pic.twitter.com/aRIpq0NXAD

Did normani just do a double pirouette, hit the ball w her knee and then BOOTY POP THE BALL OUT THE WAY!? art. pic.twitter.com/CeTyEJmLrS