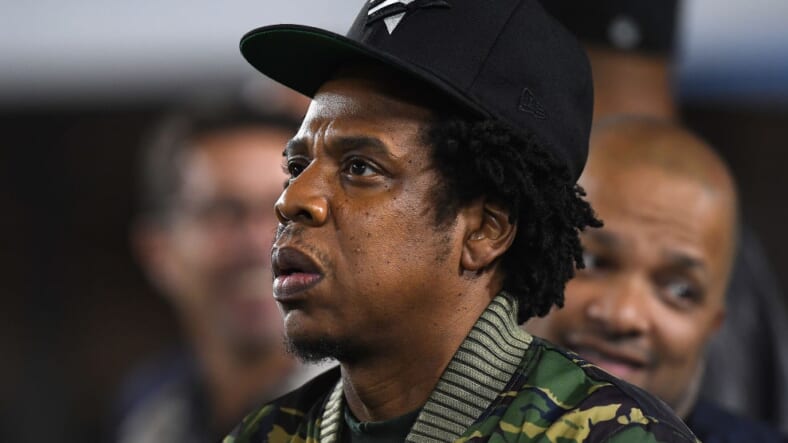 New details about Jay-Z's RocNation partnership with the NFL have leaked and critics up in arms. (Photo by Kevork Djansezian/Getty Images)

Earlier this week, it was announced that Jay-Z’s company Roc Nation agency inked a deal with the NFL encompassing entertainment and social justice, and now rumors are swirling that the rapper might become part-owner of an NFL franchise.

TheGrio previously reported that Roc Nation will serve as co-producer of future Super Bowl Halftime shows, and also contribute to Inspire Change, a foundation the NFL started in response to public outrage over their mishandling of Colin Kaepernick’s peaceful #TakeTheKnee protest.

READ MORE: Op-Ed: Only an idiot would be shocked that Jay-Z’s NFL deal leaves out Colin Kaepernick

On Friday, more details of Jay’s NFL deal emerged, with TMZ reporting how the savvy businessman will soon acquire a “significant ownership interest” in an NFL team. Variety notes that details about which team he’s eyeing or exactly when the deal will be finalized have not yet been revealed, but news of the billionaire hip-hop star and entrepreneur becoming part owner has fueled the ongoing heated debate on Twitter about Jay’s “betrayal” to the cultural with his NFL partnership.

One of Kap’s biggest defenders, Eric Reid, as well as the former 49’s girlfriend, Nessa, both publicly criticized Jay’s major money moves with the NFL.

“JAY-Z claimed to be a supporter of Colin,” Reid said. “Wore his jersey. Told people not perform at the supper bowl because of the treatment that the NFL did to Colin and now he’s going to be a part owner. It’s kind of despicable.”

Nessa hit up Twitter and wrote, “Jay-Z knew better and did NOT do better. The NFL used him but that shouldn’t surprise anyone bc that’s how the nfl moves. That’s what the NFL always does – BUY PR LOOKS. Thankfully the people see through this even if it means calling out their idol.”

In interviews with reporters for the The New York Times, Washington Post and Wall Street Journal, Jay was asked how he could comfortably be in cahoots with the league while Kaepernick remains unsigned, he responded, “I think that we forget that Colin’s whole thing was to bring attention to social injustice so in that case this is a success — this is the next thing. There’s two parts of protest: the protest, and then there’s a company or individual saying ‘I hear you, what do we do next?’ For me it’s about actionable items, what are we gonna do about it? We get stuck on Colin not having a job, you know what I’m saying? And this is more than that.”

“I support any protest that’s effective,” Jay continued. “I’m into action, I’m into real work— I’m not into how it looks from the outside. If protesting on the field is the most effective way, then protest on the field. But if you have a vehicle that can inspire change and speak to the masses at the same time, it’s hard to steal the narrative away.”