Op-Ed: Only an idiot would be shocked that Jay-Z’s NFL deal leaves out Colin Kaepernick 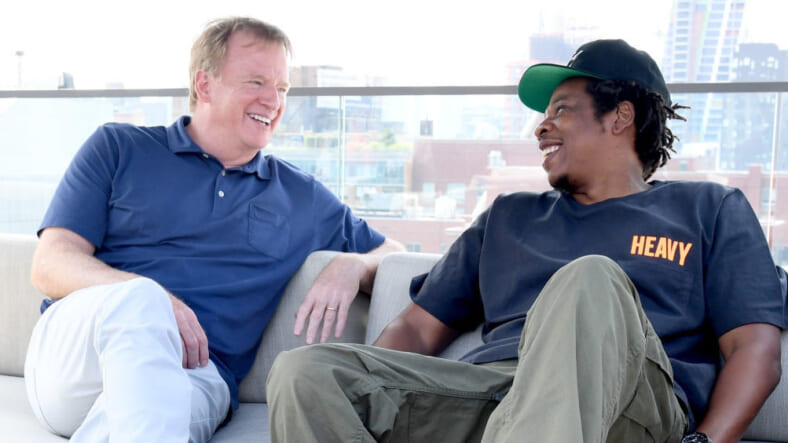 A couple years ago, I compiled all of the Jay-Z bars and verses from his entire two-decade-plus career in which he addresses his own business acumen – in ventures legal and illegal – for a project that never got off the ground. I opened the document today – it’s eight pages long.

He’s gone much deeper and wittier than the “I’m not a businessman, I’m a business, man!” bar that’s currently doing rounds on social media. Making your head bop as he raps about how much money he makes while actually making loads of money is the essence of Jay-Z’s entire career; throw a stone at his verses and you’ll likely hit one in which he’s gleefully explaining how much better off he is than your broke ass.

He’s a living legend for a reason: people listen to his music. That’s why I’m so surprised by how many are crestfallen by the recently-announced partnership between his Roc Nation company and the National Football League. Among the several NFL entertainment ventures Jay will oversee is the (once?) vaunted Super Bowl halftime show. Roc Nation also plans to amplify the NFL’s “Inspire Change” initiative announced in January to promote education and criminal justice reform, which…yeah, right.

Of course, the NFL continues to blackball quarterback Colin Kaepernick, the progenitor of a movement to kneel for the National Anthem before sports games that has been co-opted by athletes in several other sports. There appears to be a widespread cognitive dissonance at the idea that Jay-Z would “betray” Kaepernick to make a buck with the putative people’s enemy; it’s perhaps especially upsetting to Jay fans considering his vocal support of Kaepernick, most notably in the lyrics for “Apeshit” in which he calls out the NFL by name.

What did everyone truly expect from an avowed capitalist like Jay? The last time he was trending was in early June, when he hit Forbes’ list for becoming the first billionaire rapper. A lot of the same people who championed him for that are castigating his decision now, but I think those people don’t understand what “billionaire” means or entails.

Typically, one doesn’t usually make it to the Three-Comma Club without stepping on a few toes or testing the limits of morality in the interest of profit margins. There’s a decent chance someone had to visit an unemployment office or fret over how they’d feed their family on the road to Jay-Z clocking those nine zeroes.

Jay Z is billionaire, not a community organizer. He is going to protect his interests at all costs. I’m not putting stock in anything his team is doing because it won’t be to dismantle systems, it’ll be to reform a system he makes money off of.

Delusional Hov supporters have suggested that Jay was being entirely altruistic in its intentions and that he is simply positioning himself within the league to engender greater social change. Indeed, Jay’s cultural influence – especially when combined with that of his wife Beyoncé – is nonpareil. But even if that was Jay’s intention, he can’t alone turn around a century-old, multi-billion-dollar league mired in institutional racism, which has made it known in no uncertain terms that it doesn’t give a hammered shit about the protestations of Black folks – even at the sacrifice of a decent halftime show.

Some folks grasping for straws expect Jay will infect the white supremacist structure from within the league, but dude will simply not possess that level of juice. Don’t expect Beyoncé to lead a bunch of kneeling backup dancers draped in Kente cloth as she tears up a mock Declaration of Independence on-stage for next year’s Super Bowl halftime show. The check-cutting good ol’ boys aren’t going to let that happen.

I’ve even seen people suggest he’s not doing the deal for money because he already has plenty. Come now…how many billionaires have you seen say “f– it” and stop trying to accumulate even more wealth? None, because that internal engine that drives billionaires only shuts off when they’re rocking highly-ornate caskets.  Warren Buffett is 88 whole-ass years old and he’s still out here making paper because it gets the blood flowing to those ancient veins of his.

Wait a minute you’re telling me Jay did some backroom dealings that are gonna make him richer and leave an associate of his out in the cold? Nuh uh no way man not Jay Z

As for the “Apeshit” lyrics that suggest he’d never get in bed with the NFL, well…that’s no different than a husband who made a vow to his wife and screwed around on her. It just so happens there’s a whole album dedicated to Jay doing just that, but I digress.

During a conference on Thursday with the Pale Rider, NFL Commissioner Roger Goodell, a reporter asked Jay pointedly if he’d stand or kneel for the anthem, to which he responded “we’ve moved past kneeling” before devolving into a diatribe in which he looked more uncomfortable and uncertain than I’ve ever seen him.

If you need any proof of how he really feels about the protests, watch that video on a loop.

Hov is one of my favorite emcees, and I respect his ability to build an empire that runs deeper than rap. But there are aren’t too many billionaire heroes out there, regardless of how many foundations they set up or tuitions they pay off – the financial bottom line remains the imperative.

He was never meant to be the heroic voice to fight the NFL instead of joining it, and he shouldn’t have been expected to don that cape. Just listen to his bars.