The Kaepernick Effect: Is Jay-Z’s new deal with the NFL a conflict of interests?

[OPINION] While the deal between the hip-hop powerhouse and the league may have drawn criticism from some, there is something to be said for having a seat at the table as a means of creating power and making change 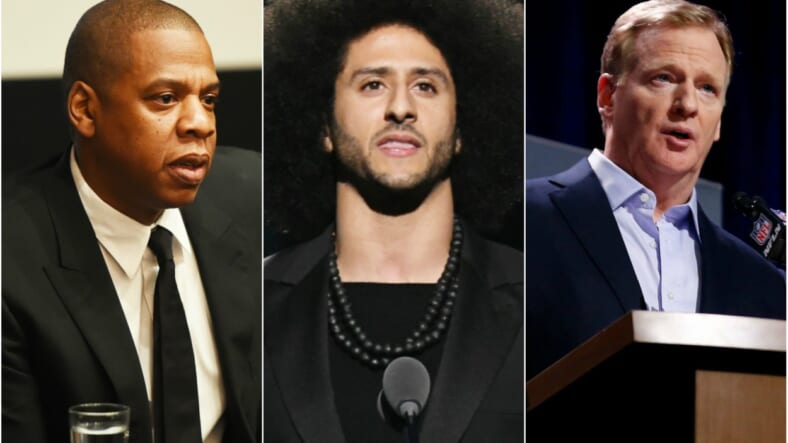 Tuesday, Black Twitter and MAGA-loving conservatives alike all lifted their brows in collective surprise when it was announced that Jay-Z and the NFL had decided to join forces.

Yes, the same NFL that unceremoniously blackballed former San Francisco 49ers quarterback Colin Kaepernick for having the nerve to care about Black and Brown people.

According to the official press release, through his company Roc Nation, Jay-Z will be co-producing the Super Bowl Halftime show and also contribute to Inspire Change, a foundation the NFL started in response to public outrage over their mishandling of Kaepernick’s peaceful #TakeTheKnee protest.

In interviews with reporters for the The New York Times, Washington Post and Wall Street Journal, both the rapper and NFL Commissioner Roger Goodell clarified that the relationship went much deeper than just having the hip-hop mogul perform at games.

“He was very quick to say that he does not want this to be about him performing, that it was broader than that,”explained Goodell. “It quickly went beyond that. Do I hope he’ll perform in the Super Bowl sometime in the next several years? Yes. But I think we’ll all know if that time comes. He’ll know in particular.”

While that insight made for a great sound bite, many still weren’t convinced this was a good idea.

Black journalist and social commentator Ernest Owens, for example, was sharp and vocal.

So the NFL is forming an entertainment and “social justice” partnership with Jay-Z and his Roc Nation agency.

Jay Z hasn’t spoken with Colin Kaepernick about this and yet says he was an “inspiration.”

If this isn’t Black capitalism exploiting the movement I don’t know what is.

Another fan felt Jay deserved the same treatment as another rapper who ran afoul of the woke crowd.

Jay Z partnered with Robert Kraft (trump supporter) for “prison reform” and now he’s partnering with the NFL to do the halftime show?!

On the complete other side of the aisle there was longtime Beyonce and Jay-Z detractor, Tomi Lahren, chiming in about why conservatives saw this as a betrayal as well.

Jay-Z will be consulting with the NFL for the Super Bowl halftime show and other performances because apparently the league doesn’t hate America and law enforcement officers at a level satisfactory enough for the former drug dealer.

To be fair, Jay and Goodell both said they made it a point to speak with Kaepernick prior to announcing their plans, but declined to reveal any details about what those conversations entailed or how the athlete personally felt about them joining forces.

When asked how he could ever be in cahoots with the NFL while Kaepernick remains unsigned, Jay responded, “I think that we forget that Colin’s whole thing was to bring attention to social injustice so in that case this is a success — this is the next thing. There’s two parts of protest: the protest, and then there’s a company or individual saying ‘I hear you, what do we do next?’ For me it’s about actionable items, what are we gonna do about it? We get stuck on Colin not having a job, you know what I’m saying? And this is more than that.”

“I support any protest that’s effective,” he continued. “I’m into action, I’m into real work — I’m not into how it looks from the outside. If protesting on the field is the most effective way, then protest on the field. But if you have a vehicle that can inspire change and speak to the masses at the same time, it’s hard to steal the narrative away.”

While I understand why this stance might anger the anti-captitalist crowd, objectively speaking he does have a point. In a perfect world, the NFL and any other institutions that have played a hand in anti-blackness would disappear into a cloud of smoke and be magically replaced by a more just and equitable bastions of diversity and inclusion.

But we don’t live in a perfect world, and since the NFL isn’t going anywhere anytime soon, there is real merit in having them partner up with accountability partners who will not only call them out when they mess up, but also make sure they come up with solutions that will create real change.

Now is Jay-Z the ideal accountability partner to make this happen? Only time will tell, but we’ve all learned over the years that it’s never a good idea to underestimate the Carter family.

For all we know, Beyonce could be planning to perform at the Super Bowl halftime show again next year, and prance onto the field on the back of a unicorn with Kaepernick riding shotgun in his new team jersey.

As fantastical as that sounds, it’s also exactly the sort of unapologetically Black, public spectacle both Hov and his wife have become notorious for playing out in front of mainstream (i. e white) audiences for years now.

Beyonce and Jay-Z are rich enough to not only get into rooms most people of color are banned from, but also powerful enough  to flip over some tables in the process, and they do so with no real fear of backlash because, no matter how much their haters scream on social media, who in their right mind is really gonna yell “security!” on one of the most famous power couples in the world?

So yeah, while I understand the knee-jerk reaction to give a side-eye to this business deal, I also think it’s best we all chill out and wait to see what comes of this. Because despite what woke Twitter might have you believe, activism doesn’t just happen on picket lines and at highly publicized social justice marches. Sometimes the person fighting for you the hardest, is ironically the one wearing a suit and sitting right across the table from “the enemy.”

Trust me. There’s levels to this, fam.