Four centuries later, those who crossed the ocean in chains are remembered 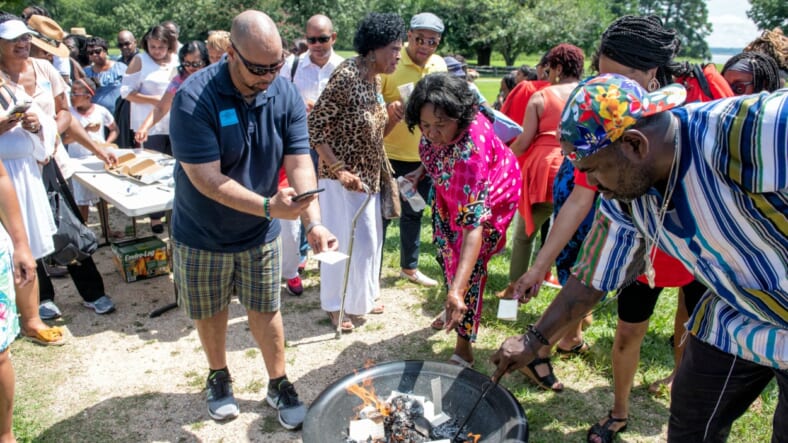 More than 200 NAACP member and supporters on Monday came together to pay tribute to the first Africans who arrived to America in 1619 through the Transatlantic Slave Trade at the James Point Comfort in Fort Monroe, Via.

Members traveled from all over the country to attend the event and recognize the 400th year since chattel slavery began in America, according to an NAACP press release.

READ MORE: Colin Kaepernick opens up about the police shooting of a Black man that propelled him into activism

The event was held as the the start of the organization’s, “Year of Return” trip to Ghana, which is being considered “as one of the largest U.S. delegations to visit the country during the Year of the Return.”

The Farafina Kan: The Sound of Africa drum and dance company and NAACP officials were all in attendance including Derrick Johnson, NAACP president along with several presidents of the organization’s various chapters and other leaders.

“Today, we stand here as their descendants, empowered by their legacy, emboldened by the knowledge that we built this country, and enlightened from today’s experience,” Chairman of NAACP Board of Directors, Leon W. Russell said to attendees of the ceremony. “As crucial as it is to look back on our history, today is a turning point for us, because we know we must forge a path ahead for the African American community in this democracy.”

Attendees also participated in an African tradition writing letters to their ancestors and placing it in a fire, as a way of paying tribute.

OPINION: The officer who put Eric Garner in an illegal, fatal chokehold was fired, but he’ll be a cop again soon

The NAACP is sponsoring a trip to Ghana taking place from August 19-28. While there, individuals will have the chance to trace their ancestry and embrace the culture by visiting places like Cape Coast Castle and Assin Manso Slave River. They will also attend an economic summit to learn more about development and investment in the country for two day.

To learn more about their journey follow their blog series at NAACP.org/ghana.