Op-Ed: The officer who put Eric Garner in an illegal, fatal chokehold was fired, but he’ll be a cop again soon 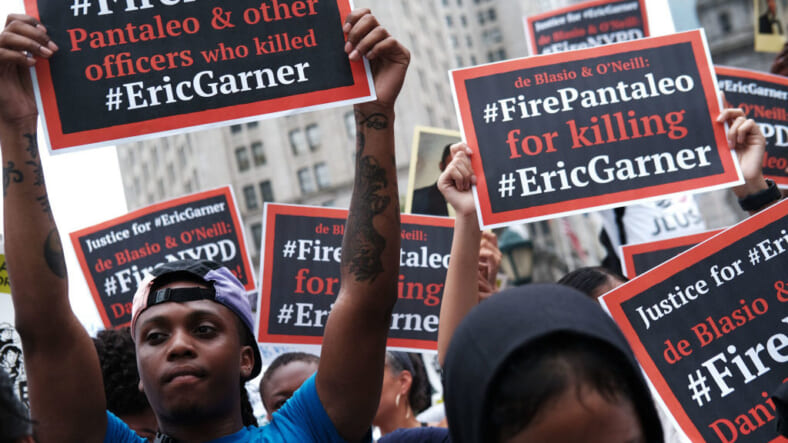 People participate in a protest to mark the five year anniversary of the death of Eric Garner during a confrontation with a police officer in the borough of Staten Island on July 17, 2019 in New York City. (Photo by Spencer Platt/Getty Images)

We learned Monday morning that Daniel Pantaleo, the New York Police Department officer who placed Eric Garner in the chokehold that contributed to his death in 2014, was finally fired. Not imprisoned. Not placed in a room with Garner’s family for five minutes. Just…fired.

If you are Black and not even remotely surprised that Pantaleo is walking free, raise your hand. Not all at once, now.

NYPD Commissioner James O’Neill seemed to veer off into his feelings when announcing Pantaleo’s termination from the force, as if he’d rather be doing anything in the world other than making sure this killer officer received the justice he has coming to him.

“If I was still a cop, I’d probably be mad at me,” he said. “It’s my responsibility as police commissioner to look out for the city.”

O’Neill acknowledged Garner and his family, but it’s quite obvious to anyone with sense that he was truly disturbed by needing to let the officer go. He also managed to drop some blame toward Garner for “resisting arrest,” while the video appears to show us an incident that the police should’ve been able to control without applying the force that they used.

They’re still blaming Eric Garner for his own murder.

They’re saying that from the moment a police officer approaches you, you have no rights or bodily autonomy & must submit to any order even if it’s unlawful.

Eric Garner told them to stop harassing him & they killed him. https://t.co/BAxqQEmgCB

It took half a decade of Pantaleo holding onto his badge after enacting an illegal chokehold on a citizen that was caught on viral video – one that included Garner’s final words, “I can’t breathe,” which became a rallying cry for the Black Lives Matter movement – for justice to be meted out. Think about the time, energy and taxpayer money that went into simply firing this man and try not to punch the closest wall.

The fact that it took 5 years, international activism, and multiple investigations to get Daniel Pantaleo fired for killing Eric Garner ON VIDEO with a banned chokehold says everything we need to know about the value of Black life in America.

READ MORE: Only an idiot would be shocked that Jay-Z’s NFL deal leaves out Colin Kaepernick

O’Neill is right about one thing: The Blue Lives Matter contingent is certainly not happy with his decision to fire Pantaleo: The union is promising to take action against O’Neill and the NYPD for daring to fire a killer cop.

Commissioner: The officers will understand why I fired Officer Pantaleo.
Cops: We understand you’re a liar and a coward.

Of course, we’re dealing with the NYPD, which is engaged with the Los Angeles Police Department in an interminable race to the bottom for the dubious honor of the trash-baggiest police force in the continental United States. It still utilizes tactics established during sentient corroded artery Rudy Giuliani’s mayoral term, when he sought to hem up people of color in an effort to “clean up” New York and became a lyrical dart board on some of the most legendary hip-hop albums of the 1990s.

Pantaleo’s light rap on the knuckles should come as no surprise considering a 2018 Buzzfeed investigative report revealed that more than 300 NYPD officers kept their jobs within the past decade after committing acts that should’ve gotten them canned. It’s a police department engaged in a degree of malfeasance and misconduct that’s as institutional in scope as the Detroit Lions’ losing streak. Body cams on police uniforms may mitigate the situation, but they seem to shine a keener light on the f—ery instead of stopping it altogether.

Police brutality and misconduct is not exclusive to the NYPD. The unbalanced treatment of Black and brown people has been a cornerstone of law enforcement since time immemorial – it’s just that we have cameras to capture it now. The Rodney King beating in 1991 and subsequent acquittal of the cops caught on tape triggered the 1992 Los Angeles riots; nearly a quarter century later, much clearer video revealed Pantaleo choking to death an unarmed man who showed no physical aggression toward the officers surrounding him.

And yet…nothing really changes. Cases get reviewed and officers are either fired or left to continue working. Meanwhile, most of us need to consult Google just to see how many unarmed Black men are murdered by the police and don’t get the justice they deserve. Reuters put together accounts of the most recent and highest-profile murders, which is infuriating when you consider there are so many more cases we don’t know about.

Pantaleo will undoubtedly work again somewhere in security or law enforcement – there are too many people with the power and resources to place a badge and gun in his hands who also view him as a martyr. His supporters want to fall back on those law enforcements chestnuts of “duty” and “training,” but when you strip all of that away, you’re left with a man who illegally choked another man to death, and not in self-defense.

His punishment can’t be validating for Black Americans. If anything, it underscores the need for the Black Lives Matter movement that Garner’s death helped amplify. With Pantaleo’s soft punishment, the New York Police Department proved, as it has many times, that Black lives still don’t matter to it. As such, we still can’t breathe.