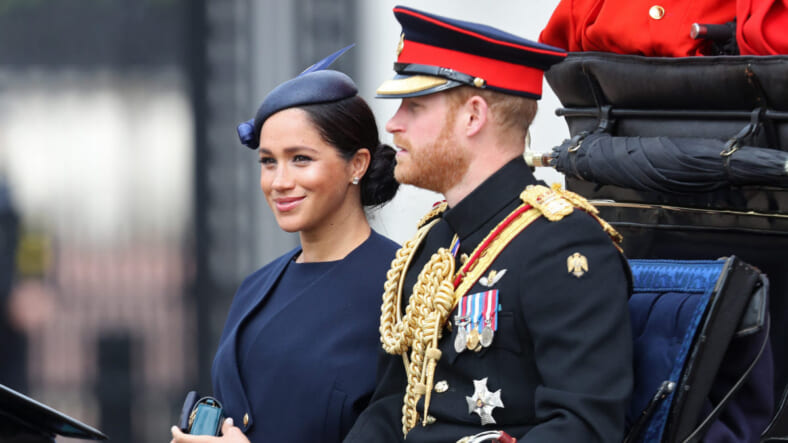 Meghan Markle, Duchess of Sussex, made her first public appearence at Trooping the Colour, a celebration of the Queen's official birthday. (Photo by Chris Jackson/Getty Images)

Australian television newsmagazine 60 Minutes Australia is under fire after airing a special targeting Megan Markle with attacks on everything from her character to her appearance. But the show is being derided as vicious and racist by critics.

Using the hashtag #Megxit, a promo for the episode claimed it planned to examine, “How Meghan Markle lost her sparkle. From adored to insufferable in less than a year. What went wrong for Meghan, and how it affects hubby Harry. Inside a Royal crisis,” the tweet declares, “Can the ghost of Princess Diana save a fairytale?”

READ MORE: Meghan Markle criticized over her ‘Women She Admires’ choices for Vogue — and who she didn’t pick

The British press has heavily scrutinized the Duchess of Sussex since she and Prince Harry went public with their relationship, and one of her biggest critics, far-right commentator Katie Hopkins who is known for her racially tinged commentary seemingly jumped at the opportunity to drag Markle again.

In the clip, the self-proclaimed “Biggest B*tch in Britain” drags Markle because she “is a no one” “wears bad clothes,” and is also allegedly “the biggest hypocrite there is.”

READ MORE: Meghan Markle teams up to create fashions for women in search of jobs

#Megxit! How Meghan Markle lost her sparkle. From adored to insufferable in less than a year. What went wrong for Meghan, and how it affects hubby Harry. SUNDAY on #60Mins: Inside a Royal crisis. Can the ghost of Princess Diana save a fairytale? pic.twitter.com/dHtiPdwa7j

Not surprisingly, the video immediately sparked a firestorm of outrage from those frustrated with an anti-Megan narrative play out consistently since the royal wedding.

60 mins Australia interviewed Katie Hopkins, a woman who is unquestionably racist and xenophobic, for this “story” about the first black member of the Royal Family.

Members of the Royal Family are not above criticism, but this racist hit piece is an absolute disgrace https://t.co/mon4LcR5jC

Shame on you for airing this trash. – Great Britain is fortunate to have this intelligent, compassionate, beautiful woman in the Royal Family. In her, Prince Harry has found happiness and for that we rejoice.

Others supported the anger at the segment calling it ‘racist’ and bullying. ‘Wow, jealousy, envy with racism… hope you’re happy with yourself meanwhile the black duchess is busy helping people in need,’ wrote one Twitter user.

Another who had been indifferent about the Duchess wrote: ‘Can’t say I had any particular feeling either way about this woman before now but the way it looks a lot of people are being particularly cruel to her. Real bad look @60Mins, real ugly s***,’ tweeted another.